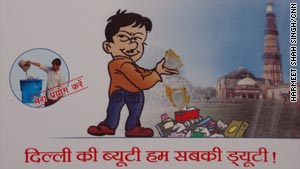 At the bottom of the city's new anti-litter poster, it reads: "Delhi's beauty is everyone's duty."
STORY HIGHLIGHTS
RELATED TOPICS

New Delhi, India (CNN) -- The Indian capital has launched a campaign to discourage urinating in public places -- a common sight across the country.

The city of New Delhi, which is preparing to host the Commonwealth Games in October of next year, will soon be displaying large billboards along its gridlocked roads and on buses in a bid to embarrass those who urinate in public to end the practice, said Mayor Kanwar Sain.

The signs will feature three characters: Mr. Thu-Thu Kumar (the spitter), Mr. Kuda Kumar (the litterbug) and Mr. Su-Su Kumar (the person who pees in public).

"The capital of India must be clean. We see how clean are places like Singapore. Then, why not Delhi?" Sain said.

Authorities will launch a similar campaign on television and radio, he said.

Urinating, spitting and littering in public are acts punishable with a fine of $10 or more in New Delhi.

Deep Mathur, the spokesman for the city's municipal corporation, said offenders had been prosecuted. He could not provide immediate figures about prosecutions aimed at sanitation control.

Bindeshwar Pathak, India's winner of the Stockholm Water Prize, which is awarded to those who contribute to the conservation and protection of water resources, welcomed the new campaign as a motivation for a cleaner Delhi. Nonetheless, he said India's capital needed at least 40,000 more well-maintained urinals and bathrooms.

Countrywide, India must build 112,000 toilets every day if it wants to meet its sanitation goal by 2012, according to the ministry of rural development.

Even as the South Asian nation emerges as a global economic power, millions of its citizens still live in poverty.

The government estimates that less than 30 percent of villagers have access to latrines, which poses serious health risks.

"Indians are clean individually, but community-wise their habits have not been very encouraging," said Pathak, who is credited with improving sanitation across cities, villages and slums. "Things, however, are changing now."