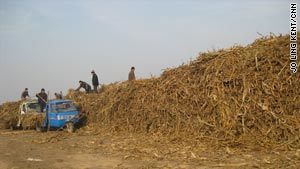 Beijing, China (CNN) -- Mountains of peanut shells are spread out across Shengchang Bioenergy's property on the outskirts of Beijing. Local farmers drive in and out, unloading dried corn stalks in exchange for a small fee.

The peanut shells, corn stalks and even tree bark are dried, ground and re-purposed. The end result: Biomass pellets that can be used as a replacement for coal.

Shengchang Bioenergy also makes a line of stoves and boilers in which the pellets can be burned. The company says the stoves are up to five times more energy efficient than traditional coal boilers and are slightly cheaper to operate.

"Our stoves mean a lot to rural villagers because they heat more effectively," said the company's general manager, Fu Youhong. "They're very accessible and we're planning to expand with the government."

Just down the street from the factory, Bi Hongjun, a bus driver for the city of Beijing, has received a new stove as part of a test project with Shengchang Bioenergy and the Ministry of Agriculture.

"It's very easy to use," Bi said as he demonstrated how to load the energy-saving stove with the pellets. "It's not like the old-style cumbersome boiler which is difficult to light."

The Shengchang boilers are one small-scale example of how China can make a large-scale transition to becoming a low-carbon economy.

Video: From peanut shells to energy

China, the world's largest emitter of greenhouse gases, relies on dirty coal for 70 percent of its energy.

But the Chinese government has recently made some commitments to change that. The National Development and Reform Commission (NDRC) -- China's top economic planner -- has pledged to cut carbon intensity 40 to 45 percent below 2005 levels by 2020. Carbon intensity is the amount of carbon released per unit of gross domestic product.

Last week Xie Zhenhua, vice minister of the NDRC, vowed that China would meet these goals.

Analysts say this means China's emissions will still continue to rise significantly -- though at a slower pace. While China is not capping emissions absolutely, most argue it is a significant step in the right direction.

"Chinese leadership is very clear that China has to improve its environmental performance," said Bjorn Stigson, president of the World Business Council for Sustainable Development. "It's really driven from a strong feeling that China needs to reduce its energy, reduce its pollution, to be able to provide a good future and quality of life."

Stigson was among a team of experts recently invited by the Chinese government to develop a plan to help transform China's energy-intensive economy. He personally met with Premier Wen Jiabao, who will represent China at Copenhagen.

In a November 2009 report entitled "China's Pathway Towards a Low Carbon Economy," Stigson outlined various steps China could take to "go green," including low-carbon industrialization, developing renewable energies and educating residents about how to live sustainably.

"Because China is building so much new capacity, China can leapfrog with solutions," Stigson said. "That will be the platform for the next phase of economic growth, which will probably, hopefully, clean up their resources and make them more efficient."

According to state-run news agency Xinhua, 80,000 households in downtown Beijing have done away with coal heating this winter, the Beijing Electric Power Company said.

The courtyards homes located in a historic section of Beijing have replaced the polluting coal stoves with electric heaters, a culmination of a seven-year program to eliminate coal heating in 160,000 homes in downtown Beijing, Xinhua reported.

But projects on the local level will not be enough to address the steep challenge in the country of 1.3 billion.

Hundreds of millions of rural Chinese citizens will still rely solely on coal to keep their families warm through the heating season that ends on March 15 of next year.

Shengchang Bioenergy has manufactured 12,000 stoves since opening in 2006. Many of them now belong to low-income families in the neighborhood around the plant outside Beijing, but many more are needed throughout China.