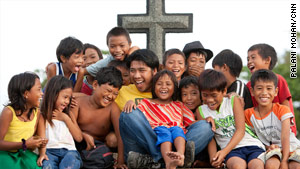 Efren Penaflorida laughed off his encounter with a pickpocket at the Manila airport on Thursday.
STORY HIGHLIGHTS
RELATED TOPICS

(CNN) -- Efren Peñaflorida, the 2009 CNN Hero of the Year, had a run-in with a pickpocket at a Manila airport on Thursday, but walked away unharmed and ready to laugh off the encounter.

CNN honored Peñaflorida in November for starting a "pushcart classroom" in the Philippines to bring education to poor children as an alternative to gang membership.

He was returning to Manila from Hong Kong, where he gave a speech, when a man dressed as a woman tried to grab something out of his bag at Manila's Ninoy Aquino International Airport, police said.

Police spotted the pickpocket and made an arrest, as a CNN crew witnessed the incident. The suspect, who police say was part of a larger pickpocketing operation, later confessed, authorities said.

Peñaflorida kept his stride, ready to laugh off the incident, said CNN producer Alex Zolbert. The hero then headed to a rally in Manila, held in honor of his activism.