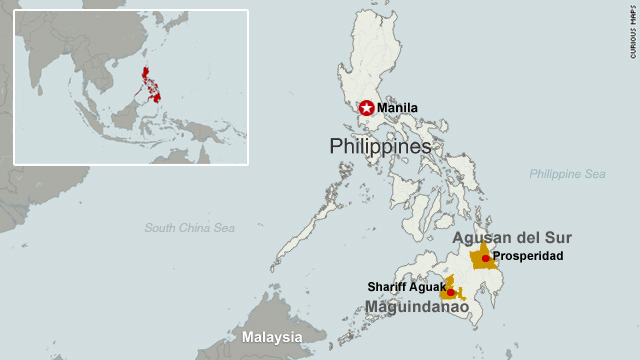 Dozens of people were kidnapped in Agusan del Sur province; also on the island, a convoy was ambushed in Maguindanao.
STORY HIGHLIGHTS

(CNN) -- Kidnappers released nine more hostages Friday in the southern Philippines, but held on to 45 others in a tense standoff, a CNN affiliate reported.

A total of 75 hostages -- including children -- were abducted Thursday afternoon in Prosperidad, the capital of Agusan del Sur province.

All together, kidnappers had released 30 hostages. Authorities were negotiating the release of the others.

Military and police security forces had surrounded the building where the hostages were being held, ready to rescue them if negotiations bogged down, the state-run Philippine News Agency said.

Video: Brutal massacre in the Philippines

The kidnappers said Friday that they would free the remaining hostages in exchange for immunity and a military and police withdrawal from the area.

They also demanded the dismissal of murder charges and arrest warrants stemming from a long-standing clan rivalry, according to the news agency.

Authorities told ABS-CBN that the murder charges would not be dropped.

The province where the abductions occurred is on the autonomous and predominantly Muslim island of Mindanao, which was set up in the 1990s to quell armed uprisings by people seeking an independent Muslim homeland in the predominantly Christian Asian nation.

On the other side of the same island, 57 people were massacred in a politically motivated attack on November 23.

There are no indications that the two incidents are related.