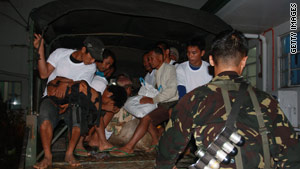 Filipino civilians arrive at a hospital after they were released by a group of tribal gunmen.
STORY HIGHLIGHTS
RELATED TOPICS

(CNN) -- Gunmen in southern Philippines have released the remaining 45 hostages, ending a three-day crisis that began when the kidnappers raided a school in a small village late last week.

Earlier, the gunmen had released 30 other hostages who had been taken from Prosperidad, the capital of Agusan del Sur province in the island of Mindanao.

The kidnapping stemmed from a long-standing tribal dispute among rival leaders of the Manobo ethnic group, government officials said.

The leader of the gunmen, Ondo Perez, wanted the government to drop murder charges against him and demanded that authorities disarm the bodyguards of his rival leader.

It was not immediately clear whether the government agreed to those demands.

The province where the abductions occurred is on the autonomous and predominantly Muslim island of Mindanao, which was set up in the 1990s to quell armed uprisings by people seeking an independent Muslim homeland in the predominantly Christian Asian nation.

On the other side of the same island, 57 people were massacred in a politically motivated attack on November 23.

There are no indications that the two incidents are related.

The group that carried out the kidnapping was of former communist guerillas.