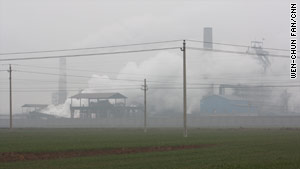 A steel mill in Linfen city, where Chinese officials are trying to tackle the pollution problem.

Linfen, China (CNN) -- On the road into Linfen, the cars seem to disappear into dense smog that clings to vanishing buildings.

The sun shines through a murky haze, if at all. The smells of industry are pungent. Just a few minutes outside and your eyes start to sting, your throat starts to hurt. You may feel dizzy or nauseous.

For visitors it can be unbearable. For residents, this is life -- breathing the consequences of China's long march toward economic prosperity.

In 2006, the World Bank dubbed Linfen the most polluted city in the world. No similar list has been compiled since then. But no matter where it may rank now, problems remain.

As top Chinese negotiators argue on China's behalf at the Copenhagen climate change summit, Linfen is back in the world spotlight.

The town lies in the heart of China's coal country in Shanxi province. It is home to the engines of industrial growth -- hundreds of coal mines, coking plants, iron and steel mills.

Farmer Xue Chunlong tends his sheep in the shadow of chimneys belching out plumes of smoke. "When the sheep eat the grass near the factory, their babies are born with birth defects," he said.

Xue, 78, lives in a home he built in Linfen four decades ago, long before big factories moved in. "Nobody cares about us now," he said.

But according to the local government, Linfen is not a neglected town, rather a success story in China's fight against pollution.

"Linfen is no longer the most polluted city in the world," said Yang Zhaofeng, of the city's Environmental Protection Bureau. "Our current environment is suitable for human inhabitance, but we will continue to make efforts."

In an effort to rid the city of its high-polluting reputation, the government has implemented the "Blue Skies, Green Water" project over the last few years. In that time, Yang said the city has shut down hundreds of mines and factories, especially small enterprises.

According to state statistics, the closures depleted Linfen's 2007 GDP by almost $300 million.

In all of Shanxi province, the government has shut down iron and steel mills with a total production capacity of 38.93 million tons, cement factories with a capacity of 15.86 million tons; and cut coke production by 70 million tons, according to state-run media. Thousands of coal mines have also been closed, and the state says 1,500 more will be shut down by the end of 2010.

The factories that remain open are held to stricter environmental standards, including Linfen Zhongtai Metals, a steel mill on the outskirts of town.

Factory boss Li Zhiguo says he spent almost $2 million outfitting the mill with new technology to help reduce pollutants, including equipment that removes sulfur and other pollutants from gas that is released into the air.

"This is a real-time monitoring system that the government uses to check our emissions," said Li, pointing to a giant frame built up around a massive chimney.

"We're used to it," said Xue. "Anyway, there aren't as many factories around here now."

He even said living in one of China's industrial hubs has its advantages.

"The steel mill provides jobs," including employment for his son, he said. "People have work, they have money."

Other residents are quick to say the pollution isn't as bad as it once was.

"It's much better than it was before," said a woman selling balloons on the street, as the smog loomed overhead.