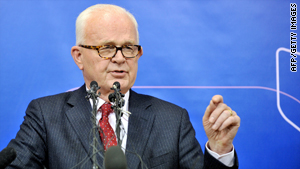 Stephen Bosworth's visit marked the highest level talks with North Korea since the start of the Obama administration.
STORY HIGHLIGHTS

WASHINGTON (CNN) -- The U.S. point person on North Korea said Wednesday that nation's uranium enrichment program must be dealt with once dormant six-party talks on its nuclear program resume.

The uranium enrichment program "clearly will be on the agenda when the talks resume," Bosworth told reporters, adding that North Korea put the issue on the agenda by announcing in September it has reached the final stage of enriching uranium, giving North Korea a second way of making nuclear bombs, in addition to its plutonium program.

Bosworth would not confirm the letter but said he did not meet with Kim Jong Il and did not bring back any message from the leader.

He said during his three-day visit he emphasized the benefits North Korea could receive under the Obama administration's policy of engagement, if it gave up its nuclear ambitions.

"We spent a good deal of time during those discussions in Pyongyang elaborating and sketching out to them the ideas of this administration, including, quoting from both President Obama and Secretary (of State Hillary) Clinton, as to the kind of bilateral relationship that we could have -- always provided that North Korea proceeds down this road to denuclearization," Bosworth said.

Bosworth's visit did not result in any promise from the North Korean government to return to the six-party negotiations aimed at ending its nuclear program.

"We all want to get back to the negotiating table. But when and how that might come about is something I just can't answer right now," Bosworth said, adding the U.S. would be consulting with its other partners in the six-party talks about how to proceed.

But Bosworth pointed to "substantial progress" during the talks, including North Korea's acceptance of the importance of both the six-party talks and the principles of a September 2005 joint statement issued by the six-party nations declaring that North Korea had "committed to abandoning all nuclear weapons and existing nuclear programs."

"The attitude, the mood, the atmosphere was very businesslike, very matter-of-fact, and very much looking to the present and to the future," he said.

North Korea has refused to return to the talks conducted by the United States, Russia, China, South Korea and Japan, insisting that it wants to talk directly with the U.S. government.

In April, Pyongyang declared the talks "dead" in anger over international criticism of its nuclear and missile tests this year. Secretary Clinton previously said the United States was willing to meet bilaterally with North Korea but only within the framework of the six-party talks. She also has warned that the United States will not normalize ties with Pyongyang or lift sanctions unless North Korea takes irreversible steps toward dismantling its nuclear program.

Analysts said North Korea is also desperate to break out of its diplomatic isolation and ease its economic pain, especially after the U.N. Security Council imposed tougher sanctions on the country in response to Pyongyang's nuclear and missile tests.