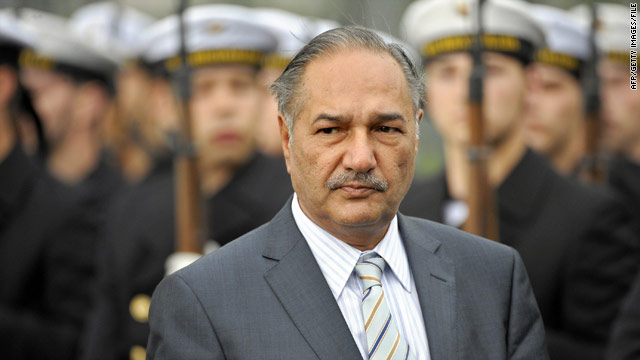 Pakistani Defense Minister Chaudhry Ahmed Mukhtar is free to travel outside the country, a day after after he was refused because he was wrongly placed on an Exit Control List.
STORY HIGHLIGHTS
RELATED TOPICS

There are 53 Pakistani individuals reinstated to an Exit Control List this week which prevents them from leaving the country -- but Mukhtar is not one of them, the National Accountability Bureau said.

The confusion stems from a list, dating back several years, that prevented some government officials facing corruption charges from leaving the country.

In October 2007, the country passed the National Reconciliation Ordinance, which provided amnesty to about 8,000 people facing various offenses, said Mohammed Afzl Sindhu, Pakistan's minister of state for law and justice. Among them were about 30 politicians. Those who had been on the Exit Control List were given amnesty and could travel.

On Wednesday, Pakistan's Supreme Court struck down the ordinance. The 17-judge court said the amnesty "seems to be against the national interest" and "violates various provisions of the Constitution."

Mukhtar was among the officials protected by the ordinance -- but Pakistani officials say he was not among the 53 people on the Exit Control List.

He was about to leave on an official trip to China on Thursday when immigration authorities told him he was on the Exit Control List. He said he raised the issue with the offices of the president and prime minister.

"It is clarified that the name of Chaudhry Ahmed Mukhtar was not included in that list of 53 persons," Khan said Friday.

With the order lifted, corruption charges against some officials will now proceed, Pakistani authorities said.

Ahmed added that 51 others have been summoned to court in Karachi.

Atiq ur Rehman, spokesman for the National Accountability Bureau in Lahore, said the cases of 80 people accused of corruption and misuse of power have been reopened and sent to accountability court for further processing. They include include Jahamgir Badar, who is the secretary general of the Pakistan People's Party, and Nusrat Bhutto, mother of assassinated former Prime Minister Benazir Bhutto.