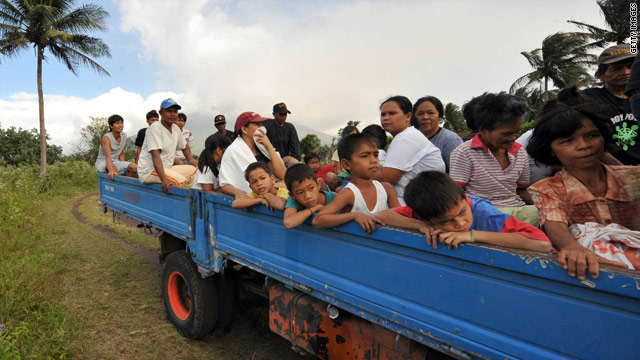 More than 40,000 people have been evacuated from the base of the Mayon volcano in the Philippines as scientists warn an explosion is imminent.
STORY HIGHLIGHTS

(CNN) -- Tens of thousands of people have fled their homes as scientists warn the towering Mayon volcano is about to explode in the Philippines, the country's national news agency reported Monday.

More than 9,000 families -- a total of 44,394 people -- are being housed in evacuation camps after authorities Sunday raised the alert status of the country's most active volcano, Albay Province Gov. Joey Salceda said.

But officials said not everyone is heeding their warnings -- some villagers were spotted within the danger zone checking on their homes and farms on the foothills of the volcano.

The government is trying to enforce a "no man's land" rule in the designated danger zone, with military and police instructed to double the personnel manning the nine checkpoints and double their foot patrol operation inside the restricted area, PNA reported.

Philippine authorities raised the alert status to Level 4 on Sunday which "means that a hazardous explosive eruption is possible within days," according to the Philippine Institute of Volcanology and Seismology.

"Audible booming and rumbling sounds were first reported in the eastern flank of the volcano" Sunday afternoon, and 1,942 volcanic earthquakes were detected by the institute's seismic network in the 24 hours to 7 a.m. local time on Monday (6 p.m. ET on Sunday), the institute said.

One was "an explosion-type earthquake" that launched a cloud of ash about 500 meters (1,640 feet) into the air, according to the statement.

The Institute recommended extending already-established danger zones of 8 km (4.9 miles) south of the summit and 7 km (4.3 miles) north of the summit of the the 8,077-foot volcano.

People in surrounding Albay Province have flocked to town centers to catch a glimpse of glowing lava cascading down the slopes of Mayon since the mountain began oozing fiery lava and belching clouds of ash last week.

The volcano, located about 500 km (310 miles) south of the Philippine capital of Manila, has erupted 49 times since its first documented eruption in 1616.

The Philippines is situated in the so-called Ring of Fire, an arc of fault lines circling the Pacific Basin that is prone to frequent earthquakes and volcanic eruptions. Mayon's most violent eruption, in 1814, killed more than 1,200 people and devastated several towns. Its last major eruption was in 1993. Since then, it has remained restless, emitting ash and spewing lava.