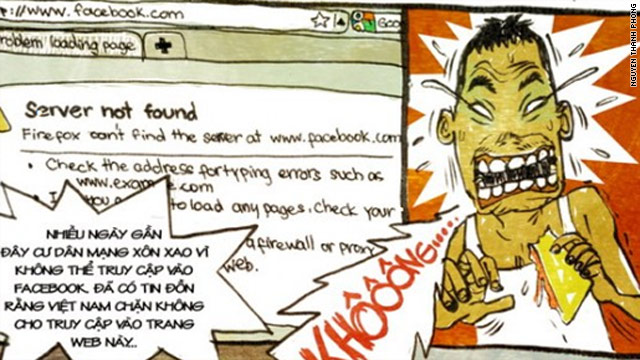 (CNN) -- An American friend studying in Vietnam was the first to tell me about her problems accessing Facebook, back in November.

My family still maintains ties to Vietnam after we emigrated almost three decades ago. With the Internet and Facebook, it has been easier than ever.

Armed with a few online connections and a bit of Vietnamese, I set out to talk to the parties involved.

Among my first leads - a blogger from Vietnam, who calls himself Diesebemol. At 50 years old, he makes a living as a private driver for foreign businessmen. He did not want to give his real name for fear of reprisal.

"It's a matter of information flow. Everybody can express themselves (on Facebook)," he says. "The government can't control it, so they oppose it."

Mr. Dang Anh Tuan, with the government's Ministry of Information and Communications, told CNN: "We don't have a policy to block Facebook," although he acknowledged that Facebook activities are a concern to the agency and that its use by Vietnam's netizens were monitored.

Vietnamese Internet Service Providers, or ISPs, in turn cite a series of reasons for the ongoing access errors, from technical malfunctioning to a problem with Facebook itself.

Debbie Frost, a spokeswoman for Palo Alto, California-based Facebook, told CNN there are no issues on Facebook's end.

"We have not changed our service; we haven't made it more difficult or made any changes that would affect service."

A partial block is all that's needed to kill off the widespread use of Facebook.
--Huy Zing, U.S. ex-pat in Vietnam
RELATED TOPICS

Although there appear to be no public records to validate claims of a government-ordered ban, some users still believe the government is to blame.

The U.S. State Department raised the issue with its counterparts at the Vietnamese embassy in Washington and in Hanoi.

A State Department official told CNN: "The department views censorship of Facebook in Vietnam as a threat to Internet freedom."

"We are especially disappointed to see Facebook being persistently blocked in Vietnam so soon after that dialogue," the official wrote in an e-mail, referring to the Vietnam Human Rights Dialogue the agency held with Vietnam's Foreign Ministry in November.

Spotty access to the popular site was first reported around the same time.

"I use Netn@m and they just completely blocked the Facebook page," he said. I reached a technical worker at Netn@m who confirmed the company was having problems providing Facebook at that time.

Pham Phuong Lien, a 22-year-old business management student in Hanoi, also received a dreaded "Access Denied" message when she tried to log in.

"We exchange Internet addresses via e-mail or chat messenger. In class, our teachers send them to us! Sometimes it works, sometimes it doesn't."

The block, if there is one, can be overcome by savvy web surfers with a bit of know-how.

On Twitter, blogs and even Facebook's Vietnamese competitor, Zing Me, users shared their outrage, but also helpful instructions on how to overcome the firewall.

Huy Zing, a U.S. ex-pat and software developer in Ho Chi Minh City, posted on his blog: "A partial block is all that's needed to kill off the widespread use of Facebook."

"We know it's a half-assed job. The technical block is not a high-quality block." he explains further. "You don't have to have a full block to stifle opinion."

Still, the obstacles put in place are irking many, Facebook addicts and casual users, especially among the ex-pat community.

Their first reaction was: "This sucks! I'm not gonna stay in this country!" Zing said.

So why should the government be worried about Facebook?

Government spokeswoman Nguyen Phuong Nga said at a December 3 news conference: "[A] number of social Web sites have been misused to convey information with contents that oppose the Democratic Socialist Republic of Vietnam," she said. "...threatening information security and causing a bad influence on Internet users."

But for some Vietnamese it's not a matter of government protection but censorship.

Nguyen Thanh Phong, a graphic designer in Hanoi, said: "Maybe the government is afraid of the expansive nature of Facebook and the speed with which information is spread? If it spreads too far, they can't control it."

Just as Vietnam's Internet community is still wary of using the Internet to its fullest potential, the government also finds itself in a tug of war between business interests and information control, as newspaper editor Vu Hao Nhien sees it.

The Vietnamese Government created the Administration Agency for Radio, TV and Electronics Information in 2008 that acts as a watchdog over Internet activity.

In September 2009, eight bloggers were tried on charges of "anti-government propaganda." They were convicted and sentenced to jail sentences ranging from two to six years, the press advocacy organization Reporters Without Borders reported. The blogger community suspects they were targeted because they began to organize offline.

More sophisticated than blogs, Facebook offers the latest in the line-up of online organizational tools, from groups and fan pages to applications.

"Facebook, even though it's not a political site, it is a convenient and friendly tool for people to use to organize and get together," says Vu, managing editor of Nguoi Viet, the largest Vietnamese language newspaper published outside Vietnam.

Vu, who also publishes the blog bolsavik.com, created the Facebook page "Free Nguyen Tien Trung" calling for the release of the democracy activist.

But pages with a stated mission opposing government policies are the exception on Facebook.

Vu says Hanoi's motives are much simpler than that. "They're afraid of dialogue and Facebook is about dialogue. They're paranoid, what can I say."

Blogger Diesebemol is all too familiar with that reality. "Vietnamese people like me, that's how I live. I talk when they let me talk. I don't have any right to express myself."

Not entirely resigned, he adds: "Sometimes though, I'll find a way to get online and talk behind their back."