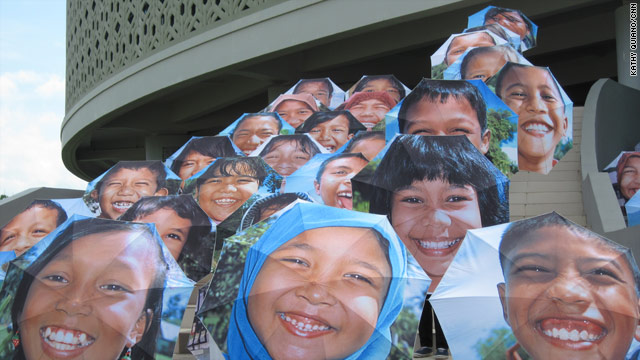 Banda Aceh, Indonesia (CNN) -- Crowds attended prayers and other ceremonies across Asia on Saturday to mark the anniversary of the deadly Indian Ocean tsunami that killed about 250,000 people in 14 countries five years ago.

The towering waves left hundreds of thousands displaced on coastlines across Africa and Asia.

One of the hardest hit areas was Banda Aceh in Indonesia, where about 150,000 people died. Residents held religious gatherings and a moment of silence to pay tribute to victims of a disaster triggered by an undersea earthquake off the island of Sumatra.

A 6.0 magnitude undersea earthquake struck near Indonesia on Saturday, but there were no reports of injury or damage, the U.S. Geological Survey said. The depth of the quake ruled out the need for a tsunami warning, local officials said.

In Banda Aceh, the Indonesian vice president, Boediono, offered a prayer at a mass grave site of the tsunami victims. Residents left flowers at the site and read prayers from small books. A few wept as they sat in the shade to escape the heat.

Video: Tsunami that will never be forgotten

"We are only human," said a woman who lost her teenage children and several nieces in the tsunami. "We'll never really forget."

The woman said the pain and the fears lives on long after the tremors are gone.

"We still feel the trauma," she said. "And when there is another earthquake, all we can do is run and pray."

A memorial event at a local tsunami museum featured dozens of schoolchildren clutching umbrellas with portraits of smiling children on them.

The tsunami, which washed away entire communities, caused nearly $10 billion in damage and more casualties than any other tsunami in history, according to the United Nations.

Indonesia was one of the worst hit areas, but massive reconstruction has helped some cities bounce back and wipe away some reminders of the tragedy.

Local conservationist Mike Griffiths said much of Banda Aceh was reduced to a "level plane of shards." He compared the tsunami aftermath to that of the atomic bombing of Nagasaki in World War II.

"It (Banda Aceh) is so built up now," Griffiths said. "Now, we can barely see 100 meters because there's been so much reconstruction. Everything's been built up on both sides of the road."

An annual service was held at the Indian archipelago of Andaman and Nicobar to honor victims of the tsunami. About 300 military and civilian officials attended the morning interfaith prayers, according to Vivek Rae, chief secretary of the islands.

In Thailand, few physical reminders of the disaster remain. The tourist industry was keen to clean up in islands such as Koh Phi Phi, where the powerful waves ripped through. Today, the thumping music and jolly backpackers give the island the party atmosphere -- a far cry from the disaster that left scores dead in beaches bustling with tourists.

Phuket province in Thailand paid tribute Saturday to victims of the tsunami by planning religious events and candlelight vigils at local beaches, including Patong and Kamala.

Other ceremonies are planned in some of the countries affected by the tsunami.