(CNN) -- Russian energy giant Gazprom has accused Ukraine of siphoning off gas intended for European customers as the standoff between them worsens. 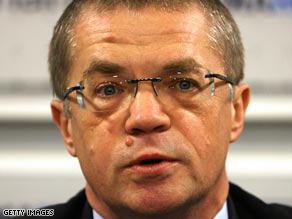 Gazprom shut off Ukraine's gas supply on Thursday after saying it owed $2 billion in missed payments.

Ukraine denies owing the money and is currently meeting its domestic needs with supplies from storage facilities.

Gazprom has reassured Europe that its natural gas supply, which runs through Ukraine, will not be affected by the dispute with Kiev.

However, analysts are concerned that if the two sides do not reach a new agreement there will be a supply cut in the next two weeks.

Gazprom deputy chairman Alexander Medvedev said the Ukraine had "declared, rather cynically, that it take gas from the export pipe."

"Balkan states have already started to suffer from the moves of the Ukrainian side," he said.

"In this respect, the Balkan states, if they consider themselves hit in this situation, should use legal means they have in the frames of the Energy Charter in order to prevent the escalation of these events."

Meanwhile, Gazprom spokesman Sergey Kupriyanov said Naftogaz Ukrainy, responsible for Ukraine's gas payments, may have paid the amount it owed but it would not arrive until January 11 because of the holiday season.

"This will settle the overdue penalties and part of the debt for gas supplies. The remaining debt for gas will be in this case $614 million.

"The contract for this year hasn't been signed yet. Naftogaz Ukrainy has withdrawn from the talks. The negotiating group is in Kiev and so far hasn't expressed its readiness to arrive in Moscow. Due to the absence of a contract for gas deliveries to Ukraine, gas isn't being supplied," Kupriyanov said.

Meanwhile, a Ukrainian delegation is in Europe meeting leaders to seek help to end the crisis.