MOSCOW, Russia (CNN) -- Gas will resume flowing "in the next few days," Russian President Dmitry Medvedev told reporters following summit talks in Moscow aimed at resolving the ongoing dispute between Ukraine and Russia which has left many parts of Europe without natural gas. 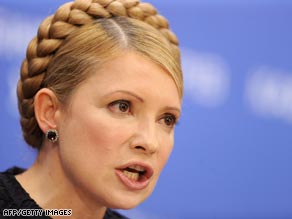 Medvedev said the summit talks, which also involved Ukrainian Prime Minister Yulia Tymoshenko and her Russian counterpart Vladimir Putin, had raised a number of "interesting ideas," including loans and extensions of credit aimed at resolving the crisis. But he reiterated that no agreement had been reached.

"Preliminary willingness (to join the consortium) has been stated by Eni, which was the first to do so, then by Ruhrgas, Wingas, Gaz de France, OMV, and Gasterra," Kupriyanov told Russian news agency Interfax.

It has now been 11 days since much of Europe was cut off from crucial supplies of Russian natural gas because of the dispute between Russia and Ukraine, which is in charge of pipelines carrying gas to the continent. The taps remain shut despite a deal signed in Brussels earlier this week.

The European Union has tried to pressure Russia and Ukraine into sorting out the matter, calling into question their reliability as energy suppliers.

Russia has said the dispute is not bilateral.

Tymoshenko said ahead of the trip that her top priority was to resume Russian natural gas transit to Europe in order to protect Ukraine's reputation as a transit country and prevent the empty pipelines from suffering damage as a result of being idle.

"The government takes full responsibility for resolving the crisis in relations with Russia, which was not initiated by us," Tymoshenko said in a statement on the government's Web site.

The prime minister said she would press for direct relations between Russian energy giant Gazprom and Ukraine's state-run gas company Naftogaz and "mutually beneficial prices" for gas and transit.

It was prices and cost that caused the problems in the first place. Russia cut off Ukraine's domestic gas supply at the start of the year, claiming nonpayment of debt, and the two sides failed to agree on the terms for a new contract.

Six days later, in a move each side blamed on the other, Russian gas supplies to Europe via Ukraine were turned off as well.

"There is the need to compromise in order to preserve friendly relations between Ukraine and Russia, and to uphold the reputation of both countries in Europe," Tymoshenko said. "I am sure that such compromise will be brokered."