(CNN) -- The future of Iceland's elected government was in question Sunday after another weekend of street protests and the resignation of the government's commerce minister -- both responses to the country's financial mess. 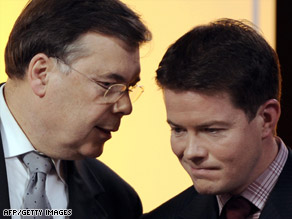 The minister, Bjorgvin Sigurdsson, resigned Sunday, saying the government had failed to restore confidence in the three months after the collapse of several of the country's leading banks, currency and stock market.

Another meeting was scheduled for Sunday night and it was "highly likely" that the parties would decide whether the current government would remain, the spokesman, Kristjan Kristjansson, said.

Sigurdsson's resignation followed Saturday's demonstration in which about 6,000 to 7,000 people in front of the parliament building called for the government of Prime Minister Geir Haarde to step down.

Protests have been staged regularly since the collapse, but Saturday's was one of the biggest to date, a spokesman for the prime minister said.

Riot police intervened during protests earlier in the week, using pepper spray and arresting some demonstrators.

In his resignation letter to the prime minister, Sigurdsson said he was taking his part of the responsibility for the economic situation in the country. But he also said that there were many more who shared responsibility, Urdur Gunnarsdottir, spokeswoman for the Ministry of Foreign Affairs, told CNN. No other officials were named.

The night before he resigned, Sigurdsson dismissed the head of the country's financial supervisory authority and requested the authority's board resign.

Haarde announced Friday he has a malignant tumor on his esophagus and would not run for re-election as chair of the Independence Party.

He also proposed that early elections be held on May 9, two years ahead of schedule. The country's five-party parliament has not yet taken up the proposal, Kristjansson told CNN.

The IMF announced in November it would pump about $827 million into the Icelandic economy immediately, with another $1.3 billion coming in eight installments. Iceland's Nordic neighbors -- the governments of Finland, Norway, Denmark and Sweden -- announced they would lend Iceland another $2.5 billion.

In his resignation letter, Sigurdsson said after the country's financial crash, he hoped the government would re-create trust and restore the country's finances. But he said the effort failed, and he was resigning to help facilitate a restoration of public trust.

Sigurdsson is legally entitled to keep receiving his salary for several months after his resignation, but said in his letter he would not accept it.