(CNN) -- The European Union on Monday removed the People's Mujajedeen of Iran from its list of terrorist organizations. Forty-seven groups remain on the EU's list. 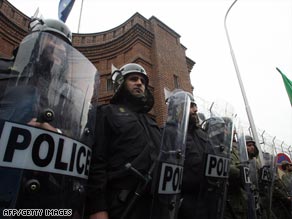 Here are some of the main ones.

-- Aum Shinri Kyo: Doomsday cult in Japan. Responsible for the 1995 sarin gas attacks on the Toyko subway that killed 12 and wounded some 5,000.

-- Real IRA: Separatists in Northern Ireland. Responsible for the Omagh bombing in 1998 that killed 28 people.

-- Jemaah Islamiyah: Al Qaeda-linked terrorist group in Indonesia and one of the largest terrorist organizations in the world. Carried out the Bali nightclub bombings in 2002 that killed more than 200 tourists, most of them Westerners.

-- Palestinian Islamic Jihad: Militant group dedicated to the creation of an Islamic Palestinian state and the destruction of Israel.

-- Tamil Tigers, or LTTE: Ethnic separatists fighting the Sri Lankan government. Responsible for fatal attacks against soldiers and civilians since conflict with the government began in 1983.

-- ETA: Basque separatists in northern Spain. Blamed for more than 800 deaths and thousands of injuries during a 40-year campaign.

-- FARC, or Revolutionary Armed Forces of Colombia: Marxist insurgents who have been fighting the government since the 1960s.