(CNN) -- Protesters disrupted the launch of a report Wednesday that focuses on dealing with the legacy of the Northern Ireland Troubles. 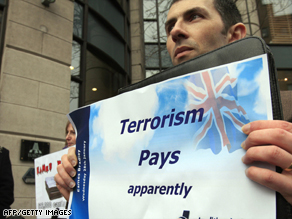 Protesters hold signs outside the Europa Hotel in Belfast before the presentation of the report.

Bereaved relatives -- of both republican and loyalist paramilitaries -- stood head-to-head pointing fingers at one another and trading accusations over the deaths of their loved ones, the British Press Association said.

The clashes took place as officials and relatives gathered in Belfast for the launch.

The report was compiled by the Consultative Group on the Past, an independent group set up to deal with the legacy of decades of sectarian violence in Northern Ireland, during which time more than 3,000 people died.

It will contain more than 30 recommendations -- from co-authors Lord Eames, a former head of the Church of Ireland, and Denis Bradley, a former Catholic priest -- on how Northern Ireland can heal the wounds of its troubled past and build a better future.

Its key proposal, "Recognition Payments" of £12,000 ($17,165) to families of the bereaved, has already proved highly controversial. Relatives of some of those murdered by paramilitary groups have described the compensation idea as "dirty blood money."

On Tuesday, Peter Robinson, the leader of Northern Ireland's Democratic Unionist Party (DUP), met Shaun Woodward, the secretary of state for Northern Ireland Tuesday, to voice his opposition to the payments that make no distinction between the families of paramilitaries and civilians who were killed, Britain's Guardian newspaper said.

However, British Prime Minister Gordon Brown said Wednesday that he acknowledged that the payments proposal was controversial.

Brown told UK lawmakers that the government would consider the report with "great care" before making its response. "I understand why one of the recommendations has provoked such controversy in Northern Ireland," he said.

"I will never forget the innocent victims in Northern Ireland."

Another key recommendation includes the creation of a "Legacy Commission" led by an international figure. The Commission would continue investigations into murders from the Troubles with a view to securing prosecutions.

However, unlike South African's post-apartheid Truth Commission, there will be no public hearings.

The report will also propose an annual Day of Reflection and Reconciliation and a shared memorial to the conflict.

The 1998 Good Friday Agreement paved the way for an end to three decades of conflict between elements of the mainly-Protestant Unionist and mainly-Catholic Nationalist communities in Northern Ireland, with the ultimate goal of creating a power-sharing government.

The conflict, which has political and religious roots that are centuries old, was centered on opposing views of the region's status. The mainly Protestant Unionist community believed it should remain part of the United Kingdom, while others within the mainly Catholic Nationalist community felt that it should leave the UK and become part of the Republic of Ireland.

Meanwhile, an inquiry into one of the period's most controversial events has still to publish its findings, 10 years after it was initiated by British Prime Minister Tony Blair.

The original Widgery Report -- which exonerated the soldiers involved -- was dismissed by the relatives of victims as a whitewash, prompting a long campaign for a second inquiry into the "Bloody Sunday" incident.

However Lord Saville's report has been repeatedly delayed, making it the longest and most expensive (at more than $258 million) inquiry in British legal history.

All About Northern Ireland • Gordon Brown