Cuban leader visits Russia in a first since Cold War

MOSCOW, Russia (CNN) -- Russian President Dmitry Medvedev welcomed Cuban President Raul Castro to Moscow on Thursday, marking the first time any Cuban leader has visited Russia's capital since Fidel Castro made a trip there 22 years ago at the end of the Cold War. 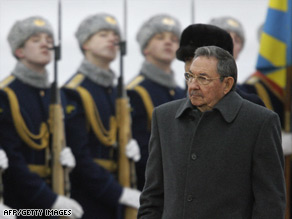 The two presidents appeared together on Russian state television in an informal meeting in which the Cuban leader spoke fondly of his last trip to Moscow almost 30 years ago.

Medvedev and Raul Castro will discuss bilateral issues Friday during their official meeting at the Kremlin.

"We plan to reach the signing of a number of agreements aimed at the promotion of interaction of our countries in the trade-economic, financial-investment and cultural-humanitarian areas at the talks," Russian Foreign Affairs Minister Sergei Lavrov told Prensa Latina in an interview posted on the official ministry Web site.

"In general, there is no doubt that Castro's visit will contribute to the strengthening of the Russian-Cuban partnership."

The last time Medvedev and Castro spoke face to face was in November when Medvedev traveled to Latin America, including a stop in Cuba. The visit, during which Medvedev also met with Raul's ailing brother, Fidel Castro, was part of a regional tour to Venezuela and Brazil, sending a poignant message to the United States that Russia is quickly gaining support in its backyard.

Besides discussing the world's hot spots and the global financial crisis, Medvedev and Raul Castro will "focus on solving the issue of lifting the blockade from Cuba under the new U.S. administration," Lavrov said, referring to the decades-old U.S. embargo against the Caribbean island nation.

"We hope that the joint position of the vast majority of members of the international community on this issue will finally contribute to revising U.S. approaches in a realistic manner," Lavrov told the interviewers.

"On our side, we are ready to decisively pursue our line aimed at canceling the blockade, in which we can see a relic of the past era."

Castro's visit is due to last until Wednesday.