(CNN) -- An apartment left untouched since before the fall of the Berlin Wall has been discovered by a developer in the eastern German city of Leipzig, German media reports said Thursday. 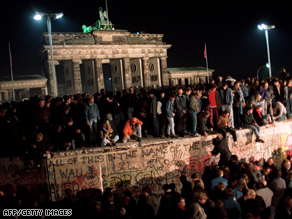 The fall of the Berlin Wall heralded the end of the communist regime in East Germany in 1989.

The discovery, made by architect Mark Aretz, revealed a small one-bedroom apartment evidently abandoned quickly by its occupants as the Communist East German state disintegrated in 1989, Spiegel Online reported.

A wall calendar showed August 1988, and the kitchen cupboard and drawers contained plastic crockery and aluminium cutlery along with communist-era food brands such as "Vita" Cola, "Marella" margarine, "Juwel" cigarettes and a bottle of "Kristall" vodka.

"When we opened the door we felt like Howard Carter when he found the grave of Tutankhamen," Aretz told the Frankfurter Allgemeine Zeitung newspaper.

"Everything was a mess but it was like a historic treasure trove, a portal into an age long gone."

According to Aretz -- a developer who renovates properties in eastern Germany -- the occupant appears to have been a 24-year-old man from Leipzig who had been in trouble with the authorities, judging by personal documents left behind.

The most recent document was dated May, 1989 -- a police search warrant for a caravan. There was also a stamped and addressed postcard written by the occupant, but he had never sent it, Spiegel said.