DAVOS, Switzerland (CNN) -- Thousands of people turned out to greet Turkish Prime Minister Recep Tayyip Erdogan on his return home from Davos Friday, a day after he stormed off stage following a heated exchange with Israeli Prime Minister Shimon Peres over Israel's military campaign in Gaza. 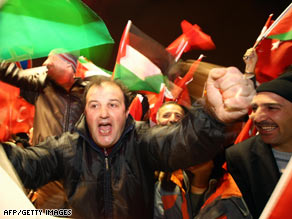 People wave national and Palestinian flags as Turkey's prime minister arrives at the airport in Istanbul on Friday.

The pair exchanged angry words during the debate but Peres told CNN on Friday the two leaders had spoken on the phone to clear the air.

In a press conference earlier, Erdogan said his words were directed at the Israeli government, not the Israeli people.

But Peres said it had been his duty to "answer unfounded accusations" and denied either side had apologized to the other.

Erdogan returned home to a hero's welcome following his scene-grabbing moment in Davos. Thousands of people lined up at Ataturk Airport in Istanbul, cheering and waving signs. A large banner read, "You Will Never Walk Alone" and other, smaller signs bore phrases including "Davos Conqueror."

People were also seen waving Turkish and Palestinian flags and throwing flowers on the road leading to Erdogan's home. Despite the glowing response at the airport, there has been some criticism in Turkish media of Erdogan's exchange with the Israeli president.

Erdogan had been angered after Peres said that Israel is committed to peace and blamed Hamas for the fighting in Gaza, where Israel staged a three-week military operation that ended earlier this month.

"I know the reason behind raising your voice is because of the guilty psychology," he said to Peres. "My voice will not be that loud, you must know that."

"When it comes to killing -- you know killing very well. I know how you hit, kill children on the beaches."

"Israel left Gaza completely -- no occupation," Peres said. "I want to understand why they throw rockets at us.