A bishop who denies that Jews were killed in Nazi gas chambers apologized Friday that his remarks caused "distress" for the pope. 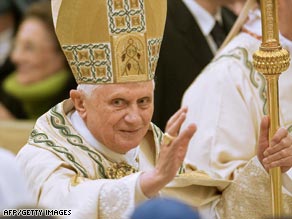 In a letter to a Vatican official, Bishop Richard Williamson did not say that his remarks, made in an interview with Swedish public television, were inaccurate.

"Amidst this tremendous media storm stirred up by imprudent remarks of mine on Swedish television, I beg of you to accept, only as is properly respectful, my sincere regrets for having caused to yourself and to the Holy Father so much unnecessary distress and problems," Williamson wrote to Cardinal Castrillon Hoyos.

He added that he has "only one comment, from the prophet Jonas, 1:12: 'Take me up and throw me into the sea; then the sea will quiet down for you; for I know it is because of me that this great tempest has come upon you.'"

Williamson posted the letter on his blog.

International Jewish leaders were among those outraged that Pope Benedict XVI lifted Williamson's excommunication in a decree issued Saturday.

Williamson and three other bishops with the Society of Saint Pius X were excommunicated by Pope John Paul II in 1988.

The society was founded by Archbishop Marcel Lefebrve, who rebelled against the Vatican's modernizing reforms in the 1960s, and who consecrated the men in unsanctioned ceremonies.

The church's decision to lift the excommunication came just a few days after the Swedish network SVT aired the interview with Williamson.

"I believe that the historical evidence is strongly against -- is hugely against -- 6 million Jews having been deliberately gassed in gas chambers as a deliberate policy of Adolf Hitler," Williamson said in the interview, which appeared on various Web sites after its broadcast.

Hoyos told the Italian newspaper Corriere Della Serra that in the discussions about lifting the excommunication, Williamson was not discussed in detail.

"Until the last moment we didn't know anything about this Williamson," Hoyos said, adding, "I really think that no one was aware."

On Wednesday, the pope himself spoke out, rejecting Holocaust denial.

He said he hopes the memory of the Holocaust "induces humanity to reflect on the unpredictability of evil when it conquers the heart of man. The Shoah (Holocaust) be for all a warning against oblivion, against denial or reductionism, because the violence done against one human being is violence done against all."

All About Vatican • The Holocaust