(CNN) -- Johanna Sigurdardottir was sworn in as Iceland's prime minister on Sunday, becoming the world's first openly gay premier and the first woman to take the post in Iceland. 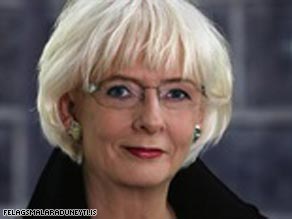 Johanna Sigurdardottir is a former flight attendant and union leader.

Sigurdardottir, 66, took office less than a week after the Cabinet resigned amid fallout from Iceland's financial collapse.

A former flight attendant who entered politics via the union movement, Sigurdardottir was minister of social affairs and social security in the outgoing Cabinet, which resigned Monday.

Iceland has been in political turmoil since October, when its currency, stock market and leading banks collapsed amid the global financial crisis. The island nation's Nordic neighbors sent billions of dollars to prop up the economy, as did the International Monetary Fund in its first intervention to support a Western European democracy in decades.

But weekly demonstrations -- some verging on riots -- finally forced Prime Minister Geir Haarde and his coalition to resign en masse on January 26.

The country's president turned to the Social Democratic Alliance party to form a new government, and they selected Sigurdardottir to lead it.

She has been a member of Iceland's Parliament for 30 years, and was in her second stint as minister of social affairs. She started her career as a flight attendant for the airline that became IcelandAir. She was active in the flight attendants' labor union during her 11 years with the airline, according to her official resume.

She briefly led her own political party, which merged with other center-left parties to form the Alliance party.

Sigurdardottir lists author and playwright Jonina Leosdottir, 54, as her spouse on her ministry Web site. She has two children from an earlier marriage.

Her prime ministership may be short-lived. The government she is forming is only due to last until the next elections, which must take place by May and could be held in April.

A statement posted by the new government on Iceland's Web site promised elections "as soon as circumstances allow," and said the interim government "will base itself on a very prudent and responsible policy in economic and fiscal matters."

The statement added that the government will treat as priorities "the principles of sustainable development, women's rights, equality and justice."

"It really does matter. It is helpful" to have an openly gay prime minister, said Gary Nunn, a Stonewall spokesperson.

"We are trying to foster the ambition that young people can be anything they want to be."