LONDON, England (CNN) -- A human rights protester was in police custody Monday after throwing a shoe at Chinese Premier Wen Jiabao during a speech at Cambridge University. 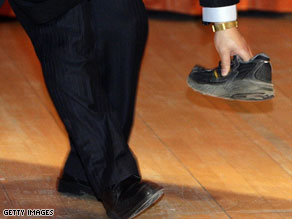 The shoe landed several meters from the premier and the man was quickly apprehended by security and handed over to police for questioning on suspicion of committing a public order offence, according to witnesses.

A student who witnessed the incident told CNN that the man had stood up and shouted, "Why are you prostituting yourself? How can you listen to the lies he is telling?"

Cameras filming the speech remained fixed on Wen during the incident, but video images later showed an unidentified student being escorted out of the building by a university proctor.

The student was then handed over to police, a university spokesman, who would not disclose his name due to 'university regulations,' told CNN.

"Fortunately the incident did not spoil the event. The auditorium was full, with nearly 500 people present, of whom just one misbehaved," a the spokesman said. "At no stage was there any serious threat to the Premier, or anyone else."

The Chinese Ministry of Foreign Affairs said of the incident: "The Chinese side has expressed its strong feelings against the occurrence of the incident. The British side said that they are very sorry that the incident should have happened and the person will be dealt with according to law. Facts have shown that the despicable behavior of the perpetrator is extremely unpopular and can in no way stem the tide of the growing friendly relations and cooperation between China and Britain."

The incident occurred while Wen, on a three day visit to the UK to strengthen economic ties, was speaking about China's role amid the global economic recession.

On Sunday, several hundred Tibetan activists had demonstrated outside the Chinese Embassy Sunday to protest his visit to London.

China has long been criticized by the international community for its human rights record in Tibet, where many Tibetans are pushing for greater autonomy and religious freedom.

Monday's shoe-throwing incident is the second of its kind in less than two months.

In December, an Iraqi journalist narrowly missed striking then-U.S. President George W. Bush with both his shoes during a news conference in Baghdad, where Bush was making a farewell visit.

-- CNN's Per Nyberg and Bridget Fallon in London, Jomana Karadsheh in Baghdad, and Erin Mclaughlin in Atlanta contributed to this report.