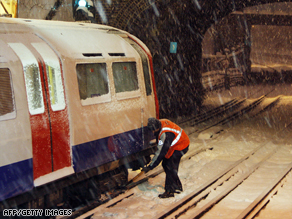 An underground worker attempts to release part of a tube train which had frozen in west London.

London -- one of the world's leading financial centers -- was brought to a standstill as heavy snow shut down the city's bus network, partially paralyzing the city. Tens of thousands of commuters were advised not to make the journey into work in the British capital and hundreds of schools were closed across the country.

Ryanair staff used loudhailers to tell passengers waiting at London's Stansted airport that no seats were available, as flights to and from the UK were badly hit, Britain's Press Association said. The airline asked travellers to be patient and said "abuse" of staff would not be tolerated.

As of 1600 GMT, the transport picture across the UK was as follows:

According to the British Airport Authority (BAA), which operates many of the UK's major airports, the adverse weather has caused significant disruption to airports in the south-east of the country in particular.

On the trains, the extent of delays and cancellations to train services was not clear as the Web site of the National Rail Enquiries service "crashed" due to the huge volume of traffic it was experiencing.

Eurostar services from London to Europe were experiencing severe delays due to heavy snow in both England and northern France.

On Monday, Britain's Highways Agency warned drivers in the south east of England to consider whether their journeys were completely necessary.

Meanwhile, staff at the Agency's National Traffic Control Center in Birmingham, in England's West Midlands, warned that snow showers would continue to affect the east of the country throughout the morning.

It added that its winter fleet, which consists of 500 salt spreaders and snow blowers, has already been used extensively this weekend, with regular salt spreading taking place to help keep the traffic moving.

According to the UK Met Office, heavy snow showers will continue to affect many parts of England with the east, south east and trans-Pennine routes likely to be the worst affected. More persistent and heavier snow will spread north across central and eastern areas during the afternoon and evening.