Iceland's new prime minister wants her country to join the European Union and adopt the euro as its official currency to help lift the Nordic nation from financial ruin, a spokesman said Tuesday. 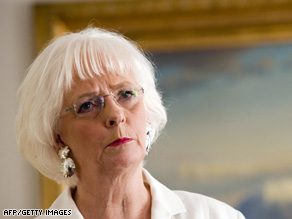 The Alliance party was until recently the only movement in Iceland's five-party parliament to push EU membership as a viable way to rescue Iceland's suffering economy.

However, Sigfusson and his party aren't convinced that the country should join the EU's 27 other members. Instead, he said he is considering a monetary union with Norway, meaning Iceland would adopt the Norwegian krone as its currency.

Iceland's newly instated minority government will only be in power for 80 days and elections are scheduled for April 25. Until then, no decisions about the country possibly joining the European Union will be made -- though the question could be important during the elections, Sigurdardottir's spokesman, Kristjan Kristjansson, said.

All About Iceland • European Union