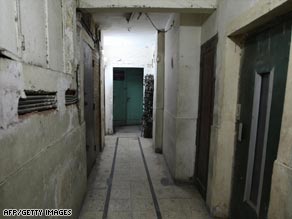 The former the hotel in Cairo where Heim spent his final days.

ZDF said research it conducted with the New York Times showed that Heim died in Cairo in 1992 of intestinal cancer. Witness accounts and documents, including a passport, prove that Heim lived under the false name of Tarek Farid Hussein, ZDF said.

CNN spoke to Heim's son, Ruediger Heim, who said his father fled Germany to Egypt via France, Spain and Morocco. Ruediger Heim told CNN he visited his father in Cairo several times, including in the final weeks of his life when the terminal cancer was discovered.

The German investigators said they were was checking the new information.

"This information has not yet been verified due to time constraints," the office said in a statement.

But German authorities said they already had hints that Heim was living and working in Egypt. The office said it received information in 1965 and 1967 indicating Heim was working in the country, but Egyptian authorities at the time, acting on a German request, did not find any conclusive evidence.

"Our main goal now is, in cooperation with the Egyptian authorities, (to) identify the remains of Aribert Heim," the office said.

The chief Nazi hunter at the Simon Wiesenthal Center, Efraim Zuroff, said the news about Heim's death, if true, is deeply disappointing.

"I personally feel a tremendous sense of disappointment that he escaped justice," Zuroff told CNN.

But he emphasized that he had not seen the evidence that Heim was dead.

"There is no body and no grave, so we can't do a DNA test," he said, adding that "there are people who have a vested interest in convincing us that he is no longer alive."

He said he expects to see the documentary evidence of Heim's death on Thursday. Heim would be 94 years old if he were still alive.

Zuroff described Heim as "the most wanted Nazi war criminal," and said the Simon Wiesenthal Center was about to raise the reward for information about him from €315,000 ($405,000) to €1 million ($1.3 million) when it heard the reports of his death.

During World War II Heim was a doctor at the Mauthausen concentration camp, where he was known to inmates as "Dr. Death" for performing often-fatal experiments on prisoners.

After the war, he was initially cleared of wrongdoing, but in 1962 German authorities issued an arrest warrant for him.