(CNN) -- Vice President Joe Biden emphasized a "new tone" in Washington and around the world as he delivered his first major speech Saturday in Munich, Germany. 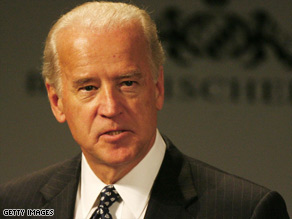 Biden told delegates at a security conference that the United States will work "preventively, not pre-emptively" whenever possible to avoid conflict, and will at the same time "vigorously defend" the nation's security.

He also said the United States will do everything possible to end the threat posed by extremists.

"We reject as false the choice between our safety and ideals," Biden told the Munich Security Conference audience, which included German Chancellor Angela Merkel and French President Nicolas Sarkozy. "America will vigorously defend our security and our values, and in doing so we will all be more secure."

That policy will be in force at Guantanamo Bay detention camp, the U.S. prison that the Obama administration intends to close, Biden said.

"America will not torture. We will uphold the rights of those we bring to justice," Biden said.

The vice president emphasized cooperation with allies and to extend a hand to others. He asked for shared responsibility for security and fighting extremism.

"America will do more. That's the good news," Biden said. "The bad news is, America will ask from more from our partners as well."

Obama's administration doesn't believe international alliances or organizations will diminish American power, Biden said. In fact, he said, such alliances do the opposite -- as long as they are "credible and effective."

He said nations working together can help persuade Iran to forgo the development of nuclear weapons, an "illicit" program that Biden said is not conducive to peace.

"Our administration is reviewing our policy toward Iran, but this much is clear: We'll be willing to talk," Biden said. "We'll be willing to talk to Iran and to offer a very clear choice: Continue down the current course and there will be pressure and isolation; abandon the illicit nuclear program and your support for terrorism and there will be meaningful incentives."

By acting preventively to avoid conflict, Biden said, the United States can start to recapture its strength.

Biden stressed a commitment to reach peace in the Middle East and draw down U.S. forces in Iraq. He also said the United States will continue to work for a stable Afghanistan.

"We look forward to sharing that commitment with the government and people of Afghanistan and Pakistan, and with all of our allies and partners, because a deteriorating situation in the region poses a security threat not just to the United States, but I would suggest, somewhat presumptively, to every one of you assembled in this room," Biden said.

Obama ordered a strategic review of U.S. policy in Afghanistan and Pakistan and is soliciting input from allies, Biden said.

"We are sincere in seeking your counsel," Biden said. "As we undertake this review, there's a lot at stake. The result must be a comprehensive strategy for which we all take responsibility."

"We also are determined to build a sustainable future for our planet," Biden said. "We are prepared to once again lead by example."

On the issue of a U.S. missile shield in Eastern Europe -- a bone of contention with Russia -- Biden said the United States will remain firm in defending against the nuclear threat, and he said Washington aims to work together with Moscow.

"We will not agree with Russia on everything," he said. "For example, the United States will not -- will not -- recognize South Ossetia and Abkhazia as independent states. We will not recognize any nation having a sphere of influence."

But, Biden added, "the United States and Russia can disagree and still work together where our interests coincide, and they coincide in many places."