MADRID, Spain (CNN) -- A bomb inside a van exploded in northeastern Madrid Monday, after a warning call by the Basque separatist group ETA. The blast caused damage but there were no immediate reports of injury. 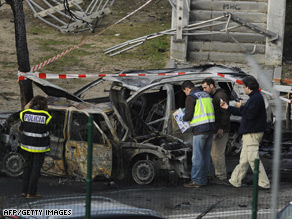 Policemen inspect the area after a van loaded with a bomb exploded in northeast Madrid.

The Red Cross received a call at 7:37 a.m. (1:37 a.m. ET), in the name of ETA, warning of the bomb. The Red Cross immediately contacted police, who cordoned off the area, a Red Cross spokeswoman told CNN.

The blast occurred shortly after 9 a.m. (3 a.m. ET) outside the building of a construction company, CNN partner network CNN+ reported.

The company, Ferrovial Agroman, is involved in building a high-speed train line in the Basque region, which ETA opposes.

"What ETA did this morning ratifies the Supreme Court decision last night," Interior Minister Alfredo Perez Rubalcaba told reporters, at the scene of the explosion.

At least 30 vehicles parked in the street were damaged, as well as the construction company offices, the Spanish police said in a statement. The bomb, it added, was placed in a van stolen last night in the Madrid area.

Exactly four years ago, on Feb. 9, 2005, ETA placed a bomb in the same Madrid neighborhood that was hit on Monday. That attack caused dozens of injuries, and damaged a different glass-façade office building.

ETA is blamed for more than 800 deaths in its long fight for Basque independence. It is listed as a terrorist group by the European Union and the United States.