LONDON, England (CNN) -- A sculpture of a giant white horse taller than the Statue of Liberty is set to tower over the countryside as part of an unusual scheme to help revive the fortunes of a depressed region of England. 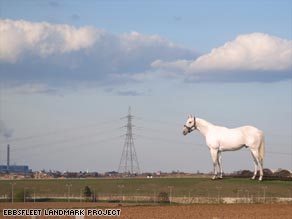 The 50-meter high horse will dominate the landscape around Ebbsfleet.

The 50-meter equine artwork was Tuesday announced as the winner of a competition to design a landmark to dominate the skyline of the Ebbsfleet Valley, set to be a new stop on the Eurostar London-to-Paris rail link.

Designed by artist Mark Wallinger -- whose previous work has included dressing in a bear suit and wandering around a gallery in Berlin -- the £2 million ($3 million) horse will be one of the largest artworks in the UK.

Wallinger's horse -- which echoes ancient white horse symbols carved into hillsides around Britain -- beat a shortlist of designs that included a tower of stacked cubes and giant steel nest.

Victoria Pomery, head of the panel that selected the design, described the 33-times normal size horse as "outstanding."

"Mark is a superb artist of world renown and his sculpture will become a real landmark for Ebbsfleet Valley and the whole region," she said.

It drew a less favorable response from readers of local Web site Kentnews.com, who described it as a "waste of money," an "abomination" and "depressing."