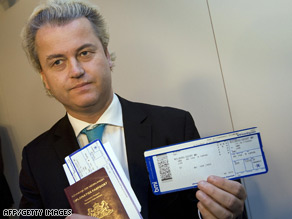 Geert Wilders shows his passport and boarding pass at Amsterdam's Schiphol airport before leaving for London.

Wilders, a Dutch lawmaker who produced a much-criticized film about Islam last year, flew to London for a screening of the movie despite being told a day earlier he would not be admitted.

"I still believed and hoped that they would change their tune," he told CNN by telephone, saying he was speaking from a detention room at London's Heathrow Airport.

He said he was met by customs officers as soon as he left the plane.

"They took me to a detention center," Wilders said, and there he was interviewed "for 45 seconds" before they took his passport and left.

He called it a "very sad day" for "freedom of speech in the European Union."

Wilders had been invited to screen his film, "Fitna," at the House of Lords on Thursday evening. The 15-minute film features disturbing images of terrorist acts superimposed over verses from Islam's holy book, the Quran, to paint Islam as a threat to Western society.

The British ambassador to the Netherlands told him Wednesday that he would be refused entry into Britain because the beliefs expressed in the film would threaten public security. Do you agree with the UK's decision to bar Wilders? Have your say

"The government opposes extremism in all its forms," said a Home Office spokesman, who would not be identified, in line with policy. "It will stop those who want to spread extremism, hatred and violent messages in our communities from coming to our country."

Wilders is a member of the Dutch parliament for the right-wing Party for Freedom. He released "Fitna" online in March 2008 to immediate controversy.

The 15-minute film features disturbing images of terrorist acts superimposed over verses from Islam's holy book, the Quran, to paint Islam as a threat to Western society.

Caroline Cox, a member of Britain's House of Lords who is not affiliated with a political party, invited Wilders to screen his film at a private session in parliament. She told CNN that she wanted lawmakers to see the film to provoke discussion.

"We're showing it on the basis of freedom of speech," said Cox, who has been a free speech advocate throughout her career. "It's a serious showing, with serious concerns and serious consideration."

Cox said she disagreed with the government's decision to bar Wilders, who was also scheduled to discuss the film.

"I think it's appalling," she told CNN. "(For) the British government to prevent a European parliamentarian coming to speak to parliamentarians over here is very disturbing. I think it will be ready by many people as a sign of appeasement to threat and intimidation."

Dutch authorities filed charges against Wilders last month, accusing him of inciting racial hatred in speeches and in the film.

"Fitna" opens with a controversial caricature of the Prophet Mohammed wearing a turban shaped like a bomb, followed by translated portions of the Quran. The passages are interspersed with graphic images of the September 11, 2001, terrorist attacks against the United States, juxtaposed with audio from 911 calls made by the victims trapped inside the World Trade Center in New York.

In his interview with the BBC, Wilders said he does not hate Muslims but opposes the "Islamization" of the European continent.

Five years ago, Dutch director Theo van Gogh was stabbed to death by a member of a radical Islamic group after his short film "Submission" used verses from the Quran written on women's bodies to criticize the treatment of women in Islamic cultures.

All About Islam • Geert Wilders