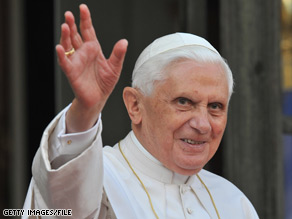 Pope Benedict XVI's meeting with Jewish leaders comes on the heels of controversy.

The pope was meeting American Jewish leaders at the Vatican on the heels of a controversy over Holocaust denial.

Last month the Vatican lifted the excommunication of a rebel bishop just days after the broadcast of an interview in which he denied the existence of gas chambers and said no more than 300,000 Jews had died in Nazi concentration camps. Scholars have in fact documented approximately 6 million Jewish deaths in the Holocaust.

On Thursday, Benedict XVI talked about his own visits to the sites of some concentration camps.

"The hatred and contempt for men, women and children that was manifested in the Shoah was a crime against God and against humanity," the pope said, using the Hebrew word for the Holocaust.

He also reiterated his commitment to the groundbreaking Catholic rejection of the centuries-old claim that the Jews killed Jesus.

"Nostra Aetate marked a milestone in the journey towards reconciliation, and clearly outlined the principles that have governed the Church's approach to Christian-Jewish relations ever since," Benedict said.

Jewish reactions to the pope's speech were broadly -- but not uniformly -- positive.

"Catholic-Jewish relations are on track," said Rabbi Arthur Schneier, head of the American Jewish Congress and a Holocaust survivor, who was among the community leaders at the meeting with the pope. "We may have some setbacks, but when you have that strong bond of trust and friendship... Then we can face every challenge that comes our way."

"Yad Vashem places importance on the Pope's unequivocal statement condemning Holocaust denial and any attempts to minimize the scope of the Shoah," said its chairman, Avner Shalev. "The Church's clear public denouncement of all types of anti-Semitism, during his meeting earlier today with American Jewish leaders, is to be welcomed."

But Abraham Foxman, the head of the Anti-Defamation League and another Holocaust survivor, said the Vatican had to match its words with deeds.

"To condemn the anti-Semitism and Holocaust denial and to reinstate into the Church a bishop who is an anti-Semite and an Holocaust denier does not end the issue," he said.

And he urged the pope to expel Williamson from the Church again.

"Every day this man continues to remain a cleric, a bishop in the Church, is an insult to the memory of all these survivors and victims and to the Jewish people," Foxman said.

CNN's Hada Messia in Rome and Kevin Flower in Jerusalem contributed to this report.

All About Pope Benedict XVI • Judaism