Sound off: Does ban curb extremism or free speech?

LONDON, England (CNN) -- A Dutch lawmaker who made a controversial film about Islam is attempting to beat a ban on entry to Britain where he has been invited to speak in the House of Lords. 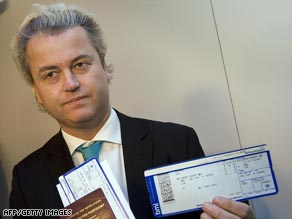 Geert Wilders at Amsterdam's Schiphol airport before flying to the UK Thursday.

The UK Home Office said the ban on Geert Wilders, who made the 15-minute film 'Fitna' -- which paints Islam as a threat to Western society -- was in line with its policy to "stop those who want to spread extremism, hatred and violent messages."

We asked what you thought of Britain's ban on Wilders and here's a sample.

Marco, Amstelveen, Netherlands: Although I do not share Wilders' views, I feel he has a fundamental right to express them. The British refusal to let him enter the country and the prosecution of Wilders in The Netherlands contributes to the notion that even in western democracies one is not free to criticise Islam.

AA, Chennai, India: The decision of UK is unexpected. So religion dominates over the rational. It is very clear that the humanity is heading towards disaster.

CMC, UK: Showing this film would surely destabilize U.K. - Middle Eastern relations even further. Though freedom of speech is a worthy ideal, it's also a lofty one when lives are at stake.

BD, New York, U.S.: In an Islamic society, there is no free speech. That is the way they want it to be in the whole world. Slowly, step by step, they are succeeding in spreading this censorship to the West. They do it through intimidation, threats, mob violence, and even worse. The censorship of Wilders is a PERFECT example of Islam controlling life--and watering down freedoms-- in the democracies . The UK should be ashamed of its weak-kneed response to these threats.

Lala, Indonesia: What is wrong with Wilders? he done nothing wrong and coward sUK. everybody is free for their opinion for anything no exception about islam.

TJAW, Florida, U.S.: Excuse me but did'nt Muslims recently protest very agressively through the streets of London? The man should be able to show his film.

Caron, Quebec, Canada: This is not surprising come from Britain - the U.K. is one of the three in the Axis of Evil of the Western empire and its almost fascist policies present a threat to the democratic nations of Europe and North America.

Stanislav, Pargue, Czech Republic: It is really bad new to hear that Wilders can not entry UK to show his movie Fitna.... we are being attacked by muslims every day in Europe.

Ozgur, Antalya, Turkey: Ex-muslim here. Wilders had just put out excerpts from koran, nothing more. there are aggressive, discriminating verses in koran. he just voiced what's within, and didnt add any to it. the muslim reaction is more like a reaction against the mishaps of their religion being exposed.

Dietermax, California, U.S.:let him go where he wants , the people do not have to show up to hear him , greet him, let him be shunned, free speech should be allowed we have the power to ignore him.

DeV, Amsterdam, Netherlands: Ironically, Fitna is about the Islam being hateful towards all others.

Davis, Georgia: Mr. Wilders should be given a medal. The way Islam is put on a pedestal in Europe is ridiculous and I can't believe the Europeans of all people would deny this man his basic human right of free speech.

Laurent, Syria: We should just let the people speak about religions, no matter how controversial it might appear. Understanding between civilizations does not come only with topics everyone agree on

JRW, The Hague, Netherlands: It's totally absurd that critics of a religion should be silenced. Where is democracy when we want to express our views. Everyone should have the right to say what it wants.

Haz, Kuwait: There is a limit to freedom of speech when people talk without knowing the facts. And indeed UK Governments' ban on Wilders is absolutely appreciated.

Gypsy, UK: Free speech is a very important concept , you cant say free speech matters, and then say about a specific thing, oh that offends people we will ban it, thats not free speech , its free speech subject to government whim and is subject to lobbying.

Tony, Gateshead, UK: Geert Wilders should be welcomed to the UK with open arms, he would be providing information 'shedding light' on sections of the Quran that practising muslims would not want to be highlighted. If world domination 'as is claimed' is part of the islamic doctrine then we need to be informed before its to late. When in rome do as the romans do.

J McGuire, Puerto Rico: How ironic, Muslims have no right of speech in their societies, come to ours to enjoy freedom and progress, and then proceed to restrict ours by terror and intolerance. Mr. Wilders have a fear of "the "Islamization" of the European continent". Dude check the writing on the wall,. seems like they now rule our society. We are afraid.

Henry, Scotland: Wow, maybe they should try stopping all the muslim extremists entering this country, its seems like its ok to preach hate and be a racist as long as your not white!

Jaime, Buenos Aires, Argentina: European capitals are under siege by islamist minorities ready to impose abdication of free opinion. Authorities in the UK and in Netherlands are particularly submissive to their blackmailing moves , and this is an ungraceful example thereof.

Amit, India: This is ridiculous. We did not expect these moves from a democratic state like U.K.

T. Phelipa, St Maarten: I agree with this move. and I'm a Dutch Citizen. Wilders has a right to express his film , IF his film weren't completely biased. I have seen it and it is completely one sided. If he had NOT only chosen to show all the extremists views of Islam, it would be a different story. Instead he shows a one sided extremist view of Islam that incites fear and anger and unjustly creates a anti-Muslim , anti-Koran sentiment. I'm a Roman Catholic and believe in something different than my Muslim friends but it's not a matter of judgement, it;s a matter of choice. I choose to believe in what I believe and I respect the Muslims (non-extremists) for believing in what they believe. But Mr. Wilders is a spotlight seeking opportunist who is relishing in his 5 minutes of fame.

Peace, Poland: I commend the UK on their decision to ban this hateful man from their country. This man is just as much an extremist as he calls Muslims extremists. so why should he have a right? He is just on the opposite extreme. that does not make him any more right than others.

Chris P, Al Khobar, Saudi Arabia: The islamic caucus has achieved a ban on white free speech whilst simultaneously remainin silent, deafeningly silent in criticising 'Jihad' 'martyrdom' and other labels sanctioned by its Holy Book to spread international terror in the name of a mediaeval religion.

Sam, Malaysia: I totally agree with banning this guy and his racist movie. the world is now built on respect among people not racism.

Murat, Toronto, Canada: In his interview with the BBC, Wilders said he does not hate Muslims but opposes the "Islamization" of the European continent.' Is this guy for real...??? He is basically saying he does not want a muslim neighbour...and that is hatefull and discriminating...Was he also opposed to the Cristianization of the whole middle east during the Crusades of his grandfathers?

Haseeb, London, UK: I agree with the UK government. People are misusing our concept of freedom of speech. It does not allow anyone to make comments about others not based on facts and that are very likely to be against the beliefs of any community. Every time someone mentions the Holocaust the Israeli government jumps up and down and bans or condemns the person including, this time, Pope Benedict XVI. So why is it different for comments against the Muslim beliefs ?

Lou Gascon, UK: I believe the film should be at least looked at by the House of Lords Remember that the Dutch appear to have a similar fear over Islam as indeed we appear to have in the UK... I have nothing against Islam proper, but worry about the fundamentalists who believe they should take over - It is however about time that we all lived together peaceably and got on with more important things in life like saving lives and helping the poor and needy around the world - about which the Islamic states and groups are adequately flushed to give major support.

Ian, Derbyshire, UK: Doesn't this demonstrate something that by expressing an opinion albeit in the form of this film, it is considered a risk to public safety. So rather than speak out against extremism we are meant to remain silent while they are allowed to do, preach and behave how they please. This is not cultural cohesion or integration. By only allowing one sided criticism the UK is being eaten away from the inside. Freedom of speech is nonsense if it only allows one side to voice its opinions with the threat that if all sides can voice them public security and safety is at risk.

Anthony, USA: It is incredible that in the 21-st century extremist religion has such influence. Wilders Fitna should be respected and distributed as widely as possible.

Abron, Europe: Is he really a filmmaker? The quality is less than any amateur films in youtube. He has nothing to say but puting some pictures with slogans. I was surprised that CNN headline was like that.