LONDON, England (CNN) -- A British Royal Navy nuclear submarine and its French equivalent collided while on operations in the Atlantic Ocean earlier this month, defense ministries in Paris and London confirmed Monday. 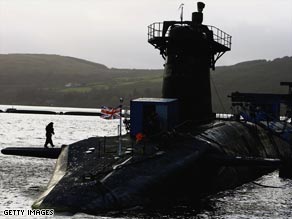 Both vessels, HMS Vanguard and Le Triomphant, were armed with nuclear warheads and suffered damage but were able to return to port under their own power following the collision.

"Two "SNLE" (nuclear submarines), one French and the other British, were, a few days ago, on standard patrols in the Atlantic. They briefly came in contact in a very slow speed while they were immersed," the French Ministry of Defense said in a statement.

"There is no casualty or injury among the crew. Neither the nuclear deterrent mission nor the nuclear security have been compromised."

In an earlier press release issued on February 6, the Ministry of Defense said the vessel's sonar dome had been damaged in a collision. The vessel was able to return to its base at Ile Longue in Brittany, northwest France, accompanied by a frigate.

"Both submarines remained safe and no injuries occurred. We can confirm that the capability remained unaffected and there has been no compromise to nuclear safety," Band said.

HMS Vanguard returned to its home base at Faslane in Scotland on February 14. The UK's Sun newspaper reported that dents and scrapes were visible on the vessel's hull as it was towed into dock by a tugboat.

Both the UK and French nuclear deterrent operations depend on complete secrecy, despite both countries' membership of NATO. But naval analyst Richard Cobbold told CNN that procedures would be in place to ensure that French and British submarines were routinely kept apart.

"Either one of these submarines was doing something different or somebody made a mistake -- but we don't know that," Cobbold said.

Both submarines were equipped with state-of-the-art sonar technology, but Cobbold said it was possible that neither was aware of the close proximity of the other vessel.

"Modern submarines are very, very quiet. In many types of water conditions they might not hear the approach of another submarine," he said.

But with both nations keeping at least one nuclear-armed submarine constantly at sea for the past 40 years, he said it was no surprise that they had eventually ended up in the same area of ocean.

"Even in an ocean the size of the North Atlantic the submarines are eventually going to be in the same patch of water at the same time," he said.

In a statement issued Monday, the UK-based Campaign for Nuclear Disarmament described the incident as "a nuclear nightmare of the highest order."

"The collision of two submarines, both with nuclear reactors and nuclear weapons onboard could have released vast amounts of radiation and scattered scores of nuclear warheads across the seabed," said CND chair Kate Hudson.

"The dents reportedly visible on the British sub show the boats were no more than a couple of seconds away from total catastrophe."

Hudson said the incident was the most serious involving a nuclear submarine since the sinking of the Russian Kursk in 2000 with the loss of the vessel's entire 118-man crew.

HMS Vanguard, which was launched in 1992, is one of four submarines which make up the UK's nuclear deterrent. Its firepower includes 16 Trident II D5 missiles capable of delivering multiple warheads to targets up to a range of 4,000 nautical miles.

The 150-meter vessel carries a crew of 141 and is powered by a uranium-fueled pressurized water reactor. Vanguard Class submarines routinely spend weeks at a time underwater on patrol in the North Atlantic.

But contact with naval commanders and government officials, including the defense secretary and the prime minister, is maintained at all times by a "comprehensive network of communications installations," the Royal Navy Web site said.

Le Triomphant was launched in 1994 and entered service in 1997 with a crew of 111, according to the GlobalSecurity.org Web site. Its weapons include 16 M45 missiles capable of launching multiple nuclear warheads.

The UK has maintained a nuclear arsenal since 1956, with at least one nuclear-armed submarine somewhere at sea continuously since 1969.

In 2006 the government approved plans to develop a new generation of nuclear weapon-carrying submarines which is due to be ready to replace the Vanguard Class by 2024. But the program, which is expected to cost around £20 billion ($29 billion), has been heavily criticized by anti-nuclear campaigners.

All About Nuclear Weapons • Submarines