ISTANBUL, Turkey (CNN) -- The head of a Kurdish nationalist party in Turkey addressed his party members in the parliament building Tuesday in the Kurdish language -- which is illegal -- prompting the national broadcaster to pull the plug on the live broadcast. 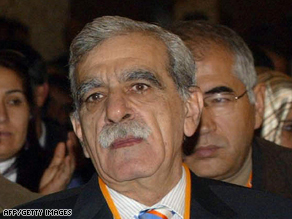 Ahmet Turk began his speech in Turkish before switching to Kurdish.

In his address, Democratic Society Party leader Ahmet Turk began his speech in Turkish, addressing the value of a "multilingual culture" and decrying the fact that the Kurdish language is not protected under Turkey's constitution.

"We have no objection to Turkish being the official language, yet we want our demands for the lifting of the ban on Kurdish language to be understood as a humanitarian demand," he said. Turk was speaking to party members in the parliament building, though he was not in the main parliamentary assembly room.

Turk then announced he would deliver the rest of his speech in Kurdish and, at that point, state broadcaster TRT cut the broadcast.

"Since no language other than Turkish can be used in the parliament meetings according to the constitution of the Turkish Republic and the Political Parties Law, we had to stop our broadcast," the TRT announcer stated. "We apologize to our viewers for this and continue our broadcast with the next news item scheduled."

The situation is somewhat ironic because Turkey began a new Kurdish language state television channel, TRT6, on January 1. Turk pointed out that paradox in his speech to parliament.

"Despite the Kurdish broadcast on TRT 6, there is no legal protection (for the language)," he said. "(Politicians) get punished for speaking Kurdish while Prime Minister (Recep Tayyip) Erdogan speaks Kurdish during rallies. Therefore, Kurdish is forbidden to Kurds yet free for (the ruling party) and the state."

The issue comes ahead of hotly contested elections scheduled to be held on March 29. Political analysts have said Turkey's ruling Justice and Development Party, known by its Turkish acronym AKP, is trying to gain votes in the Kurdish southeast, which has traditionally been held by the Democratic Society Party, or DTP.

Erdogan's launching of the Kurdish language channel is considered a historic development not only because speaking the language in parliament is illegal, but also because the Turkish republic for decades officially denied the existence of ethnic Kurds, calling them "mountain Turks" instead.

All About Turkey • Kurdish Politics