AMSTERDAM, Netherlands (CNN) -- The nationalities of the people killed in the Turkish Airlines plane crash near Amsterdam's main airport have been identified as five Turks and four U.S. citizens. 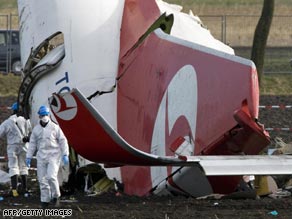 Among the dead were two Boeing employees, among four onboard the flight, their company said late Thursday in a posting on its Web site. A third was hospitalized, and a fourth employee's fate was not yet known, the company said. None of their identities have been released.

Investigators were trying to determine what caused the crash of the aircraft, a model with a good safety record flown by a well-respected airline at one of the world's most modern airports.

The crash split the plane into three parts, as it was arriving at Schiphol from Istanbul, Turkey, around 10:40 a.m. (4:40 a.m. ET). Flight 1951 went down in a farmer's field about 500 yards short of the runway in favorable weather conditions. It had 135 people onboard.

Among those injured in the crash, 63 remained hospitalized Thursday, six of them in critical condition, said Theo Weterings, the mayor of Haarlemmermeer municipality, where Amsterdam's Schiphol Airport is located.

Another 25 passengers were severely injured, an official said Tuesday.

Authorities have confirmed the nationalities of all but 15 of the passengers and crew, Weterings said. Those on board the flight included 53 Dutch, 51 Turkish, seven Americans, three Britons, and one each from Germany, Bulgaria, Finland, and Taiwan.

"I want to express my deepest sympathies again to the victims of TK flight 1951," Weterings said.

One week ago, an employees' union accused Turkish Airlines of "inviting disaster" by ignoring aircraft maintenance, it emerged Thursday.

The Turkish Civil Aviation Union alleged on its Web site on February 18 that Turkish Airlines "is ignoring the most basic function of flight safety, which is plane maintenance services."

"The company administration does not understand the consequences of ripping people from their jobs and inviting a disaster."

The union, which represents 12,000 Turkish Airline employees, is involved in an ugly dispute with the company's management.

Turkish Airlines posted a statement on its Web site on Thursday saying it takes safety seriously and that it followed all "maintenance procedures of the plane manufacturer, national and international authorities directives" for the plane.

Two days before the crash, the company statement said, the pilot of the plane reported failure with the "Master Caution Light" while taxiing. The part was replaced, and "after this replacement, the plane had eight take-offs and landings and there were no problems," Turkish Airlines said.

In the wake of the disaster, Turkish Airlines executives and officials from Turkey's Transportation Ministry said the Boeing 737-800 had last been inspected December 22.

"There was no problem with maintenance in the records of the plane," Candan Karlicetin, executive board chairman of Turkish Airlines, said in a news conference just hours after the crash.

Teams of investigators arrived at the crash site just after daybreak and set up a large white tent. They fanned out over the debris field, where the white fuselage of the Boeing lay in three pieces.

A special Turkish Airlines flight landed in Amsterdam Thursday morning from Istanbul, carrying about 70 relatives of those on board the fatal flight. The relatives were accompanied by trauma specialists, the airline said.

The flight data and voice recorders were recovered.

Turkish officials have also ruled out weather conditions as a possible reason for the crash. Dutch and Turkish authorities say they await the results of an international investigation into the cause.

Aviation experts say Turkish Airlines has a relatively good safety record, though in 2003, more then 70 people were killed when a Turkish Airlines domestic flight crashed in fog near the southeastern city of Diyarbakir.

Turkey's flagship carrier had been expanding its routes and fleet of aircraft in recent years.

Hollywood actor Kevin Costner was recently hired to star in an advertising campaign for the company. Costner's commercials were to be broadcast in 70 countries.

An employee in Turkish Airlines' advertising department said the promotional campaign was suspended in the wake of the fatal plane crash.

CNN's Jim Bittermann in Amsterdam, Netherlands, and Ivan Watson in Istanbul, Turkey, contributed to this report