(CNN) -- Ukraine's Security Service launched a raid on the country's state-run gas company Wednesday, searching for documents related to a gas deal with Russia, a spokesman for the company said. 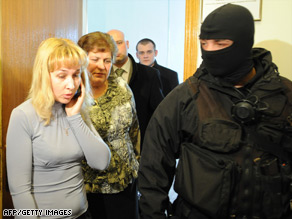 A group of about 30 gunmen wearing masks and carrying machine guns entered the offices of Naftogaz and took control of every floor of the company's building in the capital of Kiev, Naftogaz spokesman Valentyn Zemlyansky said.

Operatives from the security service then began a search for various company documents, including those pertaining to the Russia-Ukraine gas deal signed in January to end a weeks-long gas dispute, Zemlyansky told journalists, according to Russia's Interfax news agency.

The Security Service opened a criminal case on Monday into alleged misappropriation of 6.3 billion cubic meters of transit gas worth over 7.4 billion hryvnia ($880 million) by a group of Naftogaz officers, Interfax reported.

Taras Shepitko, a deputy chief of an Energy Regional Customs division under the State Customs Service, was detained as part of the case.

Ukrainian Security Service operatives confirmed to Interfax that the operation was related to that criminal case.

The armed troops were there simply to protect the investigators, the service told Interfax, citing attempts to hinder the investigation.

Naftogaz called police when the armed men stormed in but the police retreated soon after they arrived, Zemlyansky said.

CNN's Maxim Tkachenko in Moscow, Russia, contributed to this report.