(CNN) -- The British soldiers who were killed in Northern Ireland over the weekend had already packed their bags for Afghanistan and changed into desert uniforms when they were shot, a top British military officer said Monday. 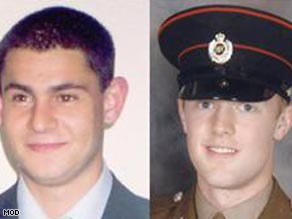 Cengiz Azimkar, left, and Mark Quinsey were killed in the shooting.

"Some of them decided to order a final takeaway pizza before they departed," Brigadier George Norton said from the base where they were killed.

"It was then that the brutal attack took place. They were off duty, they were unarmed and they were dressed in desert combats to deploy overseas."

Two men with automatic rifles shot the soldiers as the pizzas arrived, authorities said. Two other soldiers and the two pizza deliverymen were seriously wounded.

The Ministry of Defence identified them Monday as Cengiz Azimkar, 21, and Mark Quinsey, 23.

The two soldiers are the first British troops to be killed in the province in more than 12 years, the Ministry of Defense confirmed, and the shooting has sparked fears of a return to the sectarian violence that Northern Ireland suffered for two decades before that.

British Prime Minister Gordon Brown Monday met local political leaders and troops at the base in Massereene, in County Antrim.

He said the real IRA -- a dissident paramilitary group which reportedly claimed it had carried out the attack -- had "no place in the politics of Northern Ireland.

"These are callous murderers (who) carried out executions outside these barracks," he said. "These people have got to be hunted down and brought to justice as soon as possible."

The attackers who killed the soldiers shot them a second time as they lay on the ground after an initial burst of gunfire, Detective Chief Superintendent Derek Williamson of the Police Service of Northern Ireland said Sunday. The attackers fled in a car driven by a third person

Brigadier Norton responded sternly to a question about why no one returned fire during the attack. "Are you suggesting that people should have fired into a close compact group including my five soldiers?" he demanded.

Williamson called the attack "an attempt at mass murder," adding: "Our inquiries are concentrating on dissident republicans," referring to disaffected militants who refused to join the Irish Republican Army in supporting the Northern Ireland peace process.

Brown said the attack was a sign the peace process was working, rather than a sign of its failure.

Gerry Adams, the republican movement's leading figure, Monday said the attack was "an attempt to subvert the peace process, an attempt to bring everybody back to conflict, to bring more British soldiers onto the streets -- and we are not going to allow that to happen."

He said Sunday the attack was "wrong and counter-productive."

Adams leads Sinn Fein, a predominantly Catholic party that seeks for Northern Ireland to leave the UK and become part of the Republic of Ireland. The party is widely thought to be linked to the Irish Republican Army.

Thomas Burns, a member of the Northern Ireland Assembly who represents south Antrim, warned the attack could be a "devastating blow to the peace process," and a return to "bad old days again where people are being killed in open gun attacks. ... You wouldn't want ever to go back to those terrible, terrible old days of killing."

For nearly 30 years, British soldiers patrolled Northern Ireland in armored vehicles and hunkered down in bases surrounded by concrete walls and barbed wire. Violence spilled over into Britain, with the Irish Republican Army bombing London and other British cities.

Northern Ireland now has a power-sharing government and a prevailing peace that had been welcomed by all but radical splinter groups on both sides.