LONDON, England (CNN) -- A portrait painted 400 years ago and kept anonymously in an Irish home for much of the time since is now believed to be the only painting of William Shakespeare created during his lifetime. 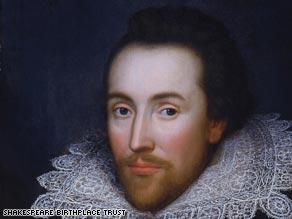 The portrait of William Shakespeare is thought to be the "only" portrait painted during his lifetime.

The image reveals a wealthy Shakespeare of high social status, contradicting the popular view of a struggling playwright of humble status, according to Stanley Wells, a professor who chairs London's Shakespeare Birthplace Trust.

Wells, a distinguished Shakespeare scholar, arranged for three years of research and scientific testing which confirmed it was painted around 1610, when Shakespeare would have been 46 years old.

The Cobbe portrait -- named after the Irish family that owns the painting -- shows Shakespeare with rosy cheeks, a full head of hair, and a reddish brown beard.

The most common portrait of Shakespeare is a gray image showing a bald Bard with a small mustache and beard, and bags under his eyes.

The identity of the man in the portrait was lost over the centuries -- until Alec Cobbe saw a portrait from Washington's Folger Shakespeare Library. That painting, which fell into disfavor as a Shakespeare portrait about 70 years ago, turned out to be one of four copies of Cobbe's portrait.

The portrait "shows a man wearing expensive costuming, including a very beautifully painted ruff of Italian lacework which would have been very expensive," Wells said.

"It establishes, for me, that Shakespeare in his later years was a rather wealthy, a rather well affluent member of aristocratic circles in the society of his time," Wells said.

"There's been too much of a tendency to believe that Shakespeare, being the son of a glover, coming for a small town in the middle of England, that he necessarily retained a rather humble status throughout his life."

Wells reads even more into what he sees in Shakespeare's newly-found face.

"I think it's plausible as a portrait as a good listener, of somebody who would have been capable of writing the plays, clearly the face of a man of high intelligence," he said.

"It's the face of a man, I think, who betrays a good deal of wisdom in his features. But, of course, as somebody (King Duncan) says in Shakespeare's story Macbeth, 'there's no art to find the mind's construction in the face.'"

It should be noted that Shakespeare's King Duncan paid a price for judging Macbeth to have the face of an honorable man. Macbeth later murdered the king.

The public can read Shakespeare's face from the original painting at Shakespeare Birthplace Trust in Stratford-upon-Avon where it goes on display for several months starting April 23.

The portrait then returns to the Cobbe family, which inherited it when an ancestor married England's Earl of Southampton -- a friend of Shakespeare who likely commissioned its painting.

All About William Shakespeare • Theater