Witness: Teacher 'sacrificed herself for student'

WINNENDEN, Germany (CNN) -- Students jumped out of windows and locked themselves in classrooms as a former pupil rampaged through a German school with a gun, killing at least a dozen people there Wednesday, a student at the school told CNN. 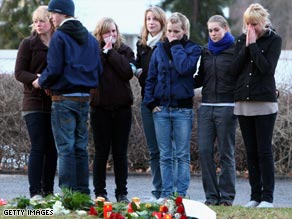 "Suddenly there were police standing in front of me and told us to run outside quickly," Luisa Santonastaso, 16, said. "At first we didn't know what to do. So first we went to the class and picked up some of our classmates and ran out.

"Then we heard that someone was inside shooting. Then we also saw a teacher who had blood on his hands because he wanted to help a female teacher who sacrificed herself for a student -- she stood in front of a student to protect her," the girl told CNN by phone from Germany.

"The guy just entered the classroom and started shooting and a friend of mine was panicking so much that she jumped out of a window. I think she broke her arm. She's in hospital now."

Santonastaso's friend was not the only one who jumped, she said.

Dressed in military gear, the gunman -- identified by police as Tim Kretschmer, 17 -- killed a total of 15 people in two different towns before he died.

Initial indications are that he shot himself, but police are continuing to investigate, said Erwin Hetger, the regional chief of police.

The rampage in Winnenden, a small town about 20 kilometers (12 miles) northeast of Stuttgart, and spread to neighboring Wendlingen.

As people at Albertville-Realschule Winnenden school -- where Kretschmer used to be a student -- realized what was happening, many burst into tears, Santonastaso said.

"Everybody was crying because nobody could really imagine what had just happened. They brought us to the swimming pool hall in Winnenden for security reasons," she said.

"Then all our parents were called because no child was allowed to leave without parents," she continued.

At least one parent got awful news when she arrived.

"One mother came and the teachers had to tell her that her child had been injured or shot dead, and then she cried really hard and fainted," Santonastaso said. iReport.com: Town in shock over shooting

Santonastaso's own parents were more fortunate.

"When I first called to tell them what had happened they wanted to come right away, but I told them that wasn't possible because we were being brought to somewhere safe," she said. Later, she said: "My parents and my friend came and we went out with them. Out there it got a bit better."

CNN's Marco Woldt and Lianne Turner contributed to this report