Roitfeld: American Vogue job 'not for me'

PARIS, France (CNN) -- The backstage gossip at recent fashion shows wouldn't be complete without rampant speculation about who is likely to replace esteemed American Vogue Editor in Chief Anna Wintour. 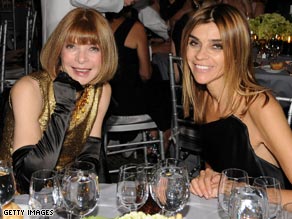 Wintour has yet to announce any plans to retire but her advancing age -- she's 60 this year -- has stoked speculation that after more than 20 years in the role it might be time to leave.

Roitfeld is accustomed to the speculation, describing it as "frustrating." She told CNN she hadn't been offered the job and even if she was she probably wouldn't take it.

A fixture at the U.S. title since 1988, Wintour has a fearsome reputation, mostly courtesy of the 2006 film starring Meryl Streep, "The Devil Wears Prada."

The film is based on a book penned by a former assistant at American Vogue who has denied suggestions Wintour was the inspiration for the demanding and odious lead character.

Roitfeld is anxious not to create any friction between her and her U.S. counterpart, telling CNN "I think Anna does a great job... I think she's a great person."

She said she would be honored to be asked to fill Wintour's shoes, but pointed out that "it's a very different job."

"I'm very happy at French Vogue to be able to do everything -- almost everything -- I want in the magazine," she said. "It would be too political at American Vogue for me. And I'm not sure I'm talking enough good English to work there."

At Vogue Paris, Roitfeld knows her readers. They are a select group of incredibly stylish and wealthy women who are thrilled rather than alienated by unconventional ideas.

The best-selling edition so far, in August 2003, featured French actress Sophie Marceau on the cover smoking a cigarette.

At French Vogue, there's less pressure to appeal to the masses. Its circulation of some 139,000 is dwarfed by the million plus readers of American Vogue.

Fashion shoots are about fantasy. There's no imperative to make any clothes they feature wearable. If it's unusual and innovative, then it's in.

With just 25 staff, Roitfeld describes the team at French Vogue as like a family. And that's how she prefers it.

Having said that, she told CNN she wouldn't dismiss any offer out of hand.

"Of course I would consider it because it would be ridiculous not to consider such a huge position -- in terms of money and in terms of power," she said.

"But I'm very happy. It's very much a small team (in Paris). America is a huge team. I know because I've worked for them before. I think it's not for me."