ST. POELTEN, Austria (CNN) -- A verdict in the case of Josef Fritzl, the Austrian man accused of keeping his daughter in a cellar for decades and fathering her seven children, could come as early as Thursday, a court official told reporters Monday. 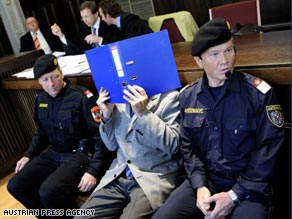 Josef Fritzl expects to spend the rest of his life in prison, his attorney has said.

As his trial began behind closed doors Monday Fritzl pleaded guilty to incest and other charges, but denied charges of murder and enslavement -- the most serious charges against him.

Franz Cutka, a spokesman for the Landesgericht St. Poelten court, said the "partly guilty" plea might mean that Fritzl contends he is not guilty of all the individual rape charges or that the violence used was not as severe as rape.

Cutka was not in court for the plea and does not speak for the defendant. Fritzl's attorney was not immediately available to explain what he meant.

Fritzl arrived at the courthouse in St. Poelten covering his face with a blue binder to shield himself from reporters, television cameras and photographers and escorted by a phalanx of police officers.

Fritzl faces six charges at a closed-door trial in St. Poelten, 45 miles (70 km) east of Amstetten, where Fritzl lived. Cameras were removed from the court

The trial is scheduled to last five days, but his attorney Rudolph Mayer said it could be shorter.

Fritzl was charged in November with incest and the repeated rape of his daughter, Elisabeth, over a 24-year period.

In an opening statement, prosecuting attorney Christiane Burkheiser handed damp-smelling items from the cellar where Elisabeth and her children had lived to jurors to give them an idea of the conditions in which they were allegedly locked up.

In all, Fritzl is charged with: murder, involvement in slave trade (slavery), rape, incest, assault and deprivation of liberty, Sedlacek's office said. He could face a maximum sentence of life in prison if convicted of murder. Mayer said Sunday that Fritzl expected to spend the rest of his life in prison.

"This man obviously led a double life for 24 years. He had a wife and had seven kids with her. And then he had another family with his daughter, fathered another seven children with her," said Franz Polzer, a police officer in Amstetten, the town where Fritzl lived, at the time of his arrest.

Elisabeth persuaded her father to allow Kerstin, then 19, to be taken to a hospital for treatment.

Fritzl confessed to police that he raped his daughter, kept her and their children in captivity and burned the body of the dead infant in an oven in the house. Elisabeth told police the infant was one of twins who died a few days after birth.

When Elisabeth gained her freedom, she told police her father began sexually abusing her at age 11. On August 8, 1984, she told police, her father enticed her into the basement, where he drugged her, put her in handcuffs and locked her in a room.

Fritzl explained Elisabeth's disappearance in 1984 by saying the girl, who was then 18, had run away from home. He backed up the story with letters he forced Elisabeth to write.

Elisabeth Fritzl and all but three of her children lived in the specially designed cellar beneath her father's home in Amstetten, Austria, west of Vienna. The other three children lived upstairs with Fritzl and his wife; Fritzl had left them on his own doorstep, pretending the missing Elisabeth had dropped them off.

Under Austrian law, if Fritzl is convicted on several offenses, he will be given the sentence linked to the worst crime. The charges he faces are:

• Murder: The infant who died in 1996 died from a lack of medical care, the state prosecutor said. The charge carries a sentence of life in prison.

• Involvement in slave trade: From 1984 until 2008, prosecutors allege, Fritzl held his daughter, Elisabeth, captive in a dungeon, abused her sexually and treated her as if she were his personal property -- in a situation similar to slavery. If he is convicted, the sentence could range from 10 to 20 years in prison.

• Rape: Between August 30, 1984, and June 30, 1989, Fritzl "regularly sexually abused Elisabeth," according to the prosecutor. The sentence could be from five to 15 years in prison.

• Incest: Parallel to the rape charge. It carries a sentence of up to one year.

• Withdrawal of liberty: Three of the children Fritzl had with Elisabeth were illegally held captive in a dungeon with no daylight or fresh air, according to prosecutors. That charge carries a sentence of one to 10 years.

• Assault: Between August 28, 1984, and April 26, 2006, Fritzl repeatedly threatened Elisabeth and their three children with gas and booby traps as warnings in case they tried to escape, authorities allege. The sentence would range from six months to five years.

CNN's Frederik Pleitgen and Melissa Gray contributed to this report.