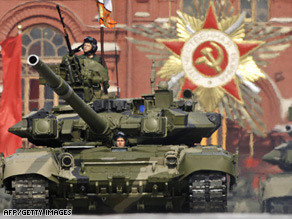 The announcement comes amid concerns in Moscow over the performance of its forces during last year's invasion of Georgia, an expert on the Russian military told CNN.

Christopher Langton, an analyst at the International Institute for Strategic Studies in London, said the campaign against the former Soviet republic had revealed significant weaknesses within Russia's armed forces.

"The Georgia thing was a wake-up call on a number of fronts," said Langton, a former British military and defense attache in Russia. "Things they expected to perform well didn't -- communications, the air force. It took five days, which is quite a long time, to suppress another country's air defenses, quite a small country's."

Medvedev said the "most important task is to re-equip the [Russian] Armed Forces with newest weapons system," in televised remarks to defense ministry officials. He said the process had already begun and would accelerate through 2011.

Medvedev insisted that falling prices for oil and gas -- which contribute significantly to Moscow's budget -- would not force him to scale back on plans to modernize the military.

The defense budget has "virtually remained the same as was planned," Medvedev said, "despite our current financial problems."

The country will aim for 70 percent of its weaponry to be "modern" by 2020, Defense Minister Anatoly Serdyukov said, according to RIA-Novosti, the state-run news agency.

Russia invaded Georgia, to its south, in August of last year -- the first time Russian military forces had engaged in an offensive outside their borders since the collapse of the Soviet Union in 1991.

The conflict strengthened the hand of Medvedev, who favors reform, against generals who oppose it, Langton, the military analyst, told CNN.

"It gave Medvedev a chance to reply to opponents in Ministry of Defense: 'We need much more mobile forces, better weaponry,'" Langton said.

But Langton pointed out that Russia has been talking about modernizing its army almost since the end of the Cold War nearly two decades ago.

Former President Boris Yeltsin announced in the early 1990s that Russia would replace its conscript army with a professional force by 2010, Langton said -- a target it has come nowhere close to meeting.

Modernization foundered on Russia's need to bring in money by exporting arms, rather than using the products of its military-industrial complex itself; opposition from entrenched interests in the Ministry of Defense, which opposed downsizing; and in the face of a national security strategy that focused on conflicts like the two Chechen wars.

Former President Vladimir Putin staked his popularity in the late 1990s on winning the second war with the restive Chechnya, Langton observed.

Medvedev, too, wants to promote pride in the country's military, the analyst said, but has a "more nuanced approach" than his predecessor, who remains influential as prime minister.

Langton said Medvedev believes Russian forces should be capable of operating alongside Western forces. But, he added, "Some of the generals don't agree with him."

All About Russia • Military Weapons