LONDON, England (CNN) -- Iran faces a "clear choice" between between international cooperation over its plans to develop nuclear energy or tougher sanctions, British Prime Minister Gordon Brown warned at a conference in London on Tuesday. 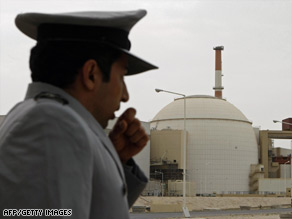 A security guard stands by the nuclear reactor at Iran's Bushehr power plant.

Brown said Iran had an "absolute right" to develop nuclear energy for peaceful purposes but said it was a test case in helping all nations secure civil nuclear power without nuclear proliferation.

"We have to create a new international system to help non-nuclear states acquire the new sources of energy they need because -- whether we like it or not -- we will not meet the challenges of climate change without the far wider use of civil nuclear power," Brown said.

"Iran is a test case for this new philosophy of the right to civil nuclear power with sanctions for rule breakers," Brown continued.

"Let me be unequivocal: Iran has the same absolute right to a peaceful civil nuclear program as any other country. Indeed, the UK and international community stand ready to help Iran achieve it. But let me be equally clear that Iran's current nuclear program is unacceptable."

Brown will say that Iran has concealed nuclear activities, refused to cooperate with the International Atomic Energy Agency, and flouted U.N. Security Council resolutions -- all of which lead the international community to regard Iran as a "critical proliferation threat."

"Iran, therefore, faces a clear choice," he added. "Continue in this way and face further and tougher sanctions, or change to a U.N.-overseen civil nuclear energy program that will bring the greatest benefits to its citizens."