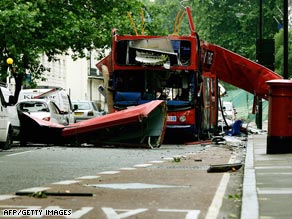 The predictions came as Prime Minister Gordon Brown's government's laid out its anti-terrorism policies and strategy in a document containing previously-classified information.

In it the government also warned that although the al Qaeda organization of Osama bin Laden, was likely to fragment in coming years, the group's ideology will live on.

Under the strategy Britain, where 52 people were killed by home-grown Muslim extremists in July 2005 bomb attacks on London's transit network, says it needs to focus on longer-term causes of terrorism.

It says the current threat to Britain and its interests comes primarily from four interrelated sources:

It says some of the factors that sustain terrorism today are likely to persist in the future -- such as conflicts exploited by terrorist groups that show no signs of abating, and evolving technology that enables terrorist acts.

Other trends, however, will constrain terrorist groups, such as being short of money and funding and having their ideology rejected by Muslims across the Islamic world, the government said.

As part of its strategy to prevent terrorism, the government will openly challenge views that could encourage violence, may "undermine our shared values" and "jeopardize community cohesion," the government said.

"We have no intention of outlawing these views or criminalizing those who hold them," the report says. "Freedom of thought and speech are rights which are fundamental to our society. But we will not hear these views in silence. We should all stand up for our shared values and not concede the floor to those who dismiss them."

The report says everyone -- government, citizens, and communities -- must challenge those who "dismiss our shared values."

The government even plans to sponsor the wider teaching of Islam and religious education, and develop citizenship education in mosque schools.

Those who are vulnerable to radicalism are also a target of the government's plan. There will be programs for mentoring, diversionary activities and leadership training as well as more intensive intervention for those who have already been drawn into violent extremist networks, the government said.