LONDON, England (CNN) -- A devout Hindu said Wednesday he was confident that a British court will rule that laws preventing him from being cremated on an open-air funeral pyre in "a sacrament of fire" are a breach of his human rights. 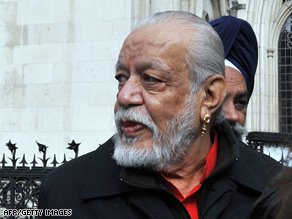 Davender Ghai arrives at the High Court for his challenge to be allowed to be cremated on a funeral pyre.

Davender Ghai, who emigrated to England from Kenya in 1958, has a number of ailments including diabetes, asthma, anemia and a degenerative spinal disease but says he fears he will not be allowed to die with "dignity."

The 70-year-old spiritual healer said that when he does die, he would like his eldest son Sanjay, who lives in Canada, to light the pyre as his family watches what they believe is his soul being released from his body.

Local officials in his home city of Newcastle, in northern England, rejected his request for a license for a pyre site, ruling that cremations outside of crematoria were illegal under the 1902 Cremation Act.

Watch as Hindu campaigns for pyres »

Ghai, a founder member of the Anglo-Asian Friendship Society (AAFS), subsequently took his legal challenge to the High Court on the grounds that this refusal was discriminatory and violated his human rights.

He and his supporters were in court this week as his legal counsel Ramby de Mello said he was "yearning to die" according to the Hindu religion and to be cremated "with dignity." What do you think?

Asked if he believed he would win the ruling, Ghai told CNN on Wednesday: "I'm very, very hopeful that we'll get it. The thing is we've got good support now. When we first started we had a few people.

"They thought it was illegal and outlawed, so they wouldn't come forward. Now we've got very, very good support. I think about 90 percent of the Hindu organizations are begging us."

If he is successful when the court gives its ruling on Thursday, other Hindus and Sikhs could be allowed similar last rites.

Ghai said some Hindus currently send the bodies of family members to India for cremation but if the ruling goes in his favor, UK cremations on funeral pyres would be much cheaper. "Many people are offended and upset (by the refusal to allow funeral pyres in Britain), because what they'll think is that all other religions got what they wanted, Hindus didn't get what they wanted.

"The reason being they're very peaceful people. They're coming to me and say you've done well to ask them for this. At least somebody has spoken on behalf of the Hindus."

He described normal cremation facilities as "a mechanized humiliation of dignity -- a waste disposal process devoid of spiritual significance."

"Confining bodies in coffins and concealing the cremation process" did not reflect his cultural values, Ghai added.

In July 2006, Ghai and the AAFS escaped prosecution after cremating the body of Rajpal Mehat, an Indian-born Sikh, on an open pyre in a remote field hired from an apparently unwitting landowner, PA reported.