France to ban bonuses for bailed out firms 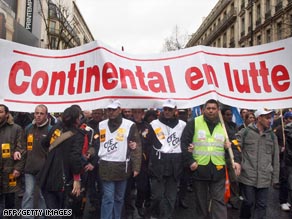 French workers have taken to the streets to protest job losses and the bonuses paid to executives.

"The decree will be issued next week, setting out conditions that will make handing out stock options or bonuses to companies that have benefited from state help illegal," Claude Gueant told France 24, a television station.

French workers' anger has been growing as more companies have announced job cuts while executives get bonuses.

Employees at a French 3M factory held a manager hostage for more than 24 hours Wednesday and Thursday over a dispute about terms for laid-off staff.

France has been hit by nationwide strikes twice in the past two months. Police said 1.2 million people demonstrated across the country a week ago, while labor unions put the figure at more than 300.

The French government has asked the business confederation MEDEF for advance plans for "sharing out value between executives, shareholders and employees," Gueant said Thursday.

If there are no "positive" propositions, public authorities "will take responsibility" and propose a text to the French parliament, he said.