(CNN) -- The figure peers down silently from an upper floor of the ruins of a Scottish castle, wearing what looks like an outfit from the Middle Ages. Could this be a long-dead Scottish earl, or just a random, modern-day visitor? 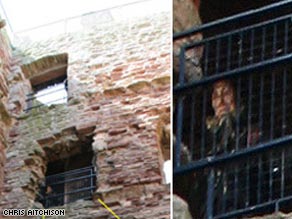 The mysterious image captured by Chris Aitchison at Tantallon Castle in eastern Scotland.

The eerie image is captured in a photograph taken by tourist Christopher Aitchison in May 2008 at Tantallon Castle, which sits on a rocky outcrop along the Scottish coast, east of Edinburgh. The "person" appears to be wearing an old-style greenish ruff around the neck.

Aitchison insists he did not tamper with the image and cannot explain it.

"I was not aware of anyone, or anything, being present in my picture, only noticing the anomaly when I got home," Aitchison said. "Staff have verified that there were no sinister dummies in period costume or historical reenactments going on that day at the castle. I did not notice any nice old ladies wearing ruffs walking around the stairs!"

The picture was made public Friday by Richard Wiseman, a professor of psychology at the University of Hertfordshire who also studies the paranormal. Wiseman said he was looking for "photographic evidence for ghosts" ahead of a session on the subject at the Edinburgh International Science Festival next week.

Wiseman solicited such photos from around the world and collated them for the conference. He said the majority of images showed mysterious-looking orbs, mists, figures and faces.

In one picture, a face appears in the side-view mirror of a parked Mercedes convertible. The photographer insists no one was around when he took the picture; skeptics say the mirror could be reflecting the headrest or be the result of digital manipulation.

Another photo of a person walking through a creek in the woods appears to show a second person wearing a hooded sweatshirt, standing on a rock nearby. Skeptics say the "figure" is an illusion created by tree branches and the rock formation in the background.

Two friends raising a drink to the camera in a third photograph are joined by a ghostly third figure in the background with a face that looks like a Halloween monster mask.

"Many of the photographs can be easily explained," said photographer Gordon Rutter, who also examined the pictures. "Orbs can be caused by the camera flash reflecting off tiny dust particles, mists can result from condensed breath in front of the lens, long exposures can create ghostly figures, and apparent faces are often people seeing patterns in random shapes."

But the "ghost" in the Scottish castle has generated the most attention. What do you think about the image?

Tantallon Castle was built in the 1350s by a nobleman and soon became the stronghold of the Douglas dynasty. For 300 years, the Douglas earls of Angus held sway at the castle as one of the most powerful families in Scotland, according to Historic Scotland, which looks after historic sites for the Scottish government.

The castle also was the scene of violence, enduring three great sieges: in 1491, 1528 and 1651. The last, by Oliver Cromwell's army, resulted in such destruction that the fortress was abandoned.

That stonework could explain the mysterious figure in the photograph, having caused unusual shadows. It is also possible that a member of the public was standing there when the picture was taken, Wiseman said -- in which case, he hopes they will come forward.

"I think it's probably a person who's been caught in slightly odd dress," Wiseman told CNN. "We know the day it was taken ... so somebody might come forward to say, 'That was me.'"

He added, "If they can explain it, e-mail me. Or indeed, if they have photos they think are better, e-mail them to me."

A similar mystery happened five years ago at another medieval site, Hampton Court Palace, built by King Henry VIII west of London. A security camera captured a figure in period dress opening a window, peering out, then closing it again.

Palace officials insisted at the time that no one was in the room, and they were at a loss to explain the figure. It later emerged that a member of staff wearing a medieval costume was the person in the video.