ROME, Italy (CNN) -- Police in Italy say they have arrested a grandfather and his son for allegedly sexually abusing the elder man's daughter for more than a 25 years, in a case likened to Austria's Josef Fritzl. 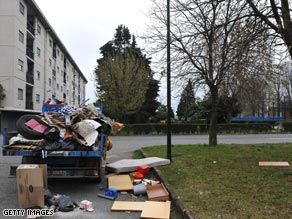 The area of Turin where the family at the center of Italy's incest case lives.

Both men were imprisoned, and were charged with sexual abuse of their daughter and sister, who is now 34 and has been identified by the pseudonym Laura. Both men have denied wrongdoing.

Giovanni is also charged with sexually abusing the eldest of his own four daughters, who are aged 21, 20, 11 and 6, Seri said.

Though only the eldest of his daughters has accused Giovanni of attempting to molest her, police -- basing their accusations on phone intercepts -- have also accused him of molesting his 11-year-old in front of the 6-year-old girl.

Laura and Giovanni have another sister and seven other brothers, police said.

The case began to emerge last October, when Laura ran away from her father's house to seek shelter at her brother's house, Seri said.

Seri said police missed a chance to intervene 15 years ago, when Laura was 19. That was when she first ran away from home and complained to police that her father had made sexual advances, Seri said.

But the Turin prosecutor and the psychiatrist who investigated in 1994 did not believe her assertions that she had been sexually molested since age 9, Seri said.

In her recent accusation, Laura initially denied that her father had committed any crime against her, accusing only her brother Giovanni, Seri said.

But -- after a police interrogation -- she changed her story, alleging that she was 16 years old when her father began forcing her to have sexual relations with him, Seri said.

Police said Laura left school at age 11 and is unable to live independently.

Seri said police were trying to determine what role, if any, Giovanni's wife may have played in the alleged abuse.

Laura's siblings have defended their father.

Sky TG24, a news channel, showed one of Laura's brothers displaying his arm, which bore the tattoo of his father's face.

Laura's sister told the news channel, "My father is not a pedophile. My brother yes. He raped his own daughters when they were young."

The case has been likened to that of Josef Fritzl, the 73-year-old Austrian who was sentenced to life this month for imprisoning and raping his daughter in his basement over 24 years, during which time she gave birth to seven children.