(CNN) -- Critics took to the social networking site Facebook to voice their fury over Pope Benedict's remark that condoms do not prevent HIV. 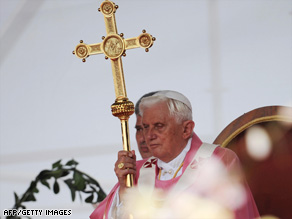 Pope Benedict XVI's anti-condom comments have raised the ire of some Facebook users.

Thousands have pledged to send the pontiff millions of condoms to protest the controversial comment he made to journalists as he flew to Cameroon last week.

"You can't resolve it with the distribution of condoms," the pope told reporters. "On the contrary, it increases the problem."

Pope Benedict XVI has made it clear he intends to uphold the traditional Catholic teaching on artificial contraception. The Vatican has long opposed the use of condoms and other forms of birth control and encourages sexual abstinence to fight the spread of the disease.

About a dozen Facebook groups have sprung up, mostly from European countries, criticizing the pontiff.

"The clergy aren't supposed to have sex at all, but they are free to tell people how to conduct themselves? That's like a girl who wears no make-up as the CEO of CoverGirl," one member posted on the page, "Condoms for Pope Benedict XVI."

"It frightens me that a man who has devoted his life to moral guidance ... and is undeniably a learned, intelligent man can be at the same time so narrow-minded, bigoted and irresponsible," posted another person on a different page.

The online campaign added another voice to a deluge of criticism, which includes the governments of France, Germany and Belgium. Aid agencies and other health organizations have also chimed in.

The Lancet, a British medical journal, urged the pope Saturday to issue a retraction for the "outrageous and wildly inaccurate" statement to journalists aboard his plane.

"When any influential person, be it a religious or political leader, makes a false scientific statement that could be devastating to the health of millions of people, they should retract or correct the public record," The Lancet said in an editorial.

"Anything less from Pope Benedict would be an immense disservice to the public and health advocates, including many thousands of Catholics, who work tirelessly to try and prevent the spread of HIV/AIDS worldwide."

Some in the Catholic Church have rallied to the pontiff's support.

Cardinal Angelo Bagnasco, head of the Italian Bishops Conference, told Times Online in Britain that Benedict was simply pointing out that condoms "had not solved and could not solve the AIDS problem."

Despite the controversy, the pope's pilgrimage spurred excitement in Africa. An estimated 1 million people turned out to hear him preach a Mass in Angola on Sunday, the last major event of his trip. He spoke of the need for reconciliation in the country, which has endured a brutal civil war.

"Look to the future with hope, trust in God's promises and live in his truth. In this way you will build something that will stand and endure," he said.