LONDON, England (CNN) -- Headlines proclaiming that G-20 activists and police are following each others' activities on Twitter, Facebook and other social networking sites may give one the impression that a new age of surveillance and political activism has dawned. 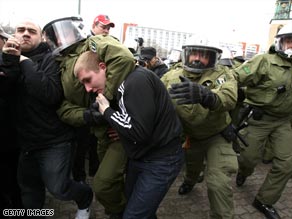 Riot police arrest a protestor Saturday during a Berlin rally against this week's G-20 meeting.

University of Manchester political philosopher Martin O'Neill, who works on equality and social justice, told CNN that activists have a reputation for being early adopters of technology.

O'Neill explained that the arrival of the printing press made broad dissemination of information possible. By the 17th century, English campaigners for civil and religious liberty were using print to spread their message, muster support and create their own ideology. "They were not just discussing ideas in print," O'Neill said. "They used print to shape the image of the movement.

"The Chartists, who pushed for universal suffrage in the 19th century, did the same but also used mass subscriptions to fund election candidates. You can see the parallels with the Obama election campaign."

More recently, activists have been quick to exploit communications technologies to disseminate information, connect with each other and gather en masse.

From film in the mid-20th century to email in the early 1990s, new technologies have been seized and adopted by campaigners. Even the humble fax machine had its moment, disseminating information for organizations such as the International Campaign to Ban Landmines (ICBL) in the latter part of the century.

See a timeline showing activists' use of technology in campaigning »

But it is the rise of the Internet that has allowed campaigners to connect and mobilize to an unprecedented -- indeed, global -- extent.

Clay Shirky, author of "Here Comes Everybody" and an expert on the social and economic effects of Internet technologies, told CNN that the "seminal event" for online campaigning was the 1999 WTO protest in Seattle, where tens of thousands of activists descended on the city.

"It was really that collection of protests that pioneered the new, diffuse and hard-to-defend-against violent protests that we've now seen," he said.

That's because Internet technologies -- particularly mobile technologies -- have made it dramatically easier to organize groups of people in protest -- and far harder for police to know where to target their defensive efforts.

"[Protesters] have made it impossible for the defenders to adopt a cut-off-the-head-and-the-body-will-die strategy," he told CNN. "[Technology] has made the idea of a frontline of protests almost completely amorphous."

That was apparent at the 2005 G-8 protests, as Steve McGookin, writing in Forbes magazine at the time, pointed out. "The use of cheap, ubiquitous hardware -- walkie-talkies, pagers, cell phones and other PDA-type devices -- has transformed the organizational abilities of every potential demonstrator," he wrote.

It was also on show at the 2007 G-8 protests in Heiligendamm, Germany, when, as Clay Shirky puts it, "groups of people acting as a giant distributed sensor network" identified a security breach in the police cordon. Within seconds, the breach had been broadcast to nearby protesters, enabling them to outmaneuver police and make a dash for the secure area.

What's different now, though, is that campaigning is no longer restricted to a hardcore of interlinked global activists. While sites such as Indymedia have allowed campaigners to connect online for a decade, it's the arrival of mass-social-media networks like Facebook and Twitter that have brought large-scale, multi-way communication to the mainstream.

Simply put, far more people are digitally connected. That means it's easier than ever for groups to coalesce -- and dissipate -- quickly. Political protests are gaining traction online -- most successfully on single-issue campaigns when organizers can reach people who may not have a history of political engagement.

These days, no cause is complete without an accompanying clutch of Facebook groups. For the most part, large-scale protests organized on mainstream social networks have so far been peaceful.

The 2006 anti-immigration-policy protests in the United States (MySpace), the protests at the Myanmar government's crackdown on Buddhist monks' calls for democracy (Facebook) and worldwide anti-FARC demonstrations last year (Facebook), which saw 4.8 million people take to the streets in Colombia alone, have come off without incident.

But WTO, G-8 and G-20 protests have a history of turning violent.

So, as the police cordon around East London tightens and police brace themselves for the expected influx of protesters, Shirky says that "increasingly totalitarian defense cordons coupled with increasingly violent protests" are ultimately unsustainable.

It's been seen at the 2001 G-8 summit in Genoa, Italy, when anti-globalization activist Carlo Giuliani died from a police gunshot wound -- but Shirky says we may not have seen clashes between police and protesters peak yet.

"I fear it'll happen when it turns deadly and protesters are killed, because this escalating cat-and-mouse game is unsupportable," he said. "That's the nightmare scenario, with the cat eating a bunch of the mice."

Mark Tutton and Olivia Sterns contributed to this report.