(CNN) -- Google's ambitious plan to offer a 3-D street level view of communities across three continents hit a snag when angry residents of a UK village blocked the search engine's camera car from photographing their homes. 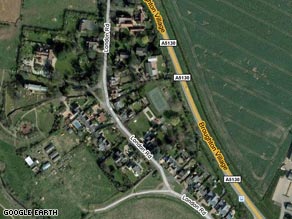 Broughton, can be seen from the air on Google Earth, but not from the ground.

Fearing the appearance of their well appointed properties on the Web site would attract criminals scouting for burglary targets, villagers in Broughton, north of London, summoned the police after spotting the car.

"I was upstairs when I spotted the camera car driving down the lane," resident Paul Jacobs told The Times of London.

"My immediate reaction was anger: How dare anyone take a photograph of my home without my consent? I ran outside to flag the car down and told the driver he was not only invading our privacy but also facilitating crime.

"This is an affluent area. We've already had three burglaries locally in the past six weeks. If our houses are plastered all over Google it's an invitation for more criminals to strike. I was determined to make a stand, so I called the police."

Google's Street View project to map 360-degree images of roads and homes across the world has generated numerous complaints over privacy, despite automated software that blurs faces and car licence plates.

A Google spokesman, quoted by the UK Press Association, said: "Embarking on new projects, we sometimes encounter unexpected challenges, and Street View has been no exception.

"We know that some people are uncomfortable with images of their houses or cars being included in the product, which is why we provide an easy way to request removal of imagery. Most imagery requests are processed within hours."

The spokesman added: "We take privacy very seriously, and we were careful to ensure that all images in our Street View service abide by UK law."